Jolly japes for All Fools’ Day!

The first day of April is All Fools’ Day when it is customary to play tricks on others.  Writing in the 1820s, William Hone described some ‘jocular deceptions’ practised by children.   A boy would shout out at a passer-by:
‘Sir, there’s something out of your pocket!’
‘Where?’
‘There!’
‘What?’
‘Your hand, Sir!  April Fool!’ 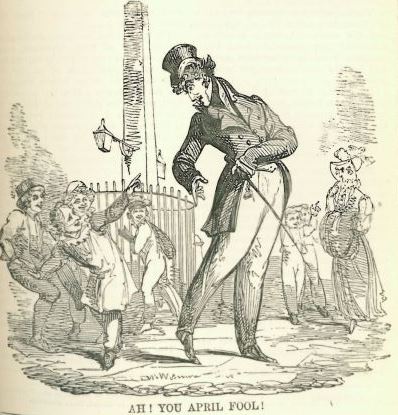 Another prank was to bow to a woman and say gravely:
‘Ma’am, I beg your pardon, but you've something on your face!’
‘Indeed!  What is it?’
‘Your nose, ma’am!  April Fool!’

Unsuspecting youngsters were sent on errands to buy half a pint of pigeon’s milk or to enquire at a bookseller for a copy of The Life and Adventures of Eve’s Mother.

The British Library’s newspaper collection is a rich source for April Fool jokes.  The Scots Magazine in 1795 printed a story about a London shopkeeper who had always been fond of mischief.  As a boy he greased the strings of the chaplain’s violin and stalked through the graveyard at night wrapped in a tablecloth. The newspaper published what it claimed to be the entry for 1 April 1790 from the shopkeeper’s journal:

Having risen early, the shopkeeper flung a shilling out of the window to the watchman, asking him to rap at the door and cry ‘Fire!’  His wife started up out of bed in a fright and ran into the street half naked.  He was obliged to give her a shilling to quieten her.

At ten o’clock the shopkeeper sent a letter to Mr Plume the undertaker telling him that his neighbour Frank Fuz had died suddenly in the night. He saw six of Plume’s men go in ‘and heard old Fuz very loud with them’.

He sent invitations to his club to dine at Deputy Dripping’s, and invited Dripping to dine at Alderman Grub’s house in Hampstead.  Grub was out of town that day.

At twelve o’clock the shopkeeper received an order in the name of an Essex customer for six pounds of snuff.  Believing this to be an April Fool trick, he kicked the messenger out of the shop.

He tapped a schoolboy on the shoulder and asked what he had got behind him. When the boy replied ‘A fool,’ causing people nearby to laugh, the shopkeeper ‘did not see much in it’ and was not amused.

The day’s events were said to have had repercussions.  Neighbour Fuz never again bought tobacco from our prankster. The Essex customer sent a letter threatening the shopkeeper with an action for assaulting his servant.  Deputy Dripping refused to support the shopkeeper’s aspiration to become churchwarden.

The writer of the article concluded with a stern warning to those keen on April Fool japes:
‘…this contemptible and vulgar talent, though in season but for a day, may produce most lasting effects; that a friend may be lost, and an enemy created by the momentary triumph of ill-founded pride, and bastard humour’.