Inspired by the TV drama Indian Summers, I decided to investigate the social life in Simla under British rule. Was it dominated by eating, drinking, playing cards, gossiping and arguing, interspersed with some amateur dramatics? 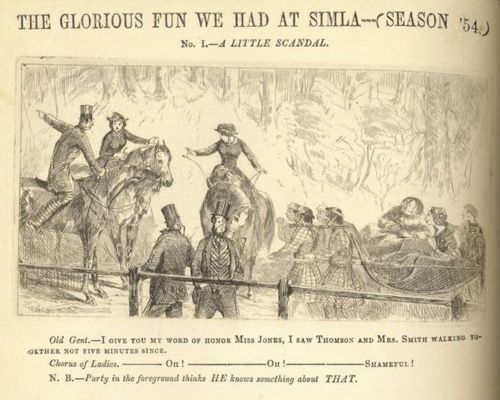 From The Delhi Sketch Book 1 January 1855

Simla was a hill station in the Himalayan foothills popular with convalescents. It then developed into the summer capital of the British administration in India. There was a variety of clubs in Simla to help the Europeans pass their time pleasantly. The oldest was the United Services Club founded in 1844, with membership restricted to commissioned military officers, army or navy chaplains, members of the Indian Civil Service and judges.  Indians and women were not permitted to join, although guests were admitted.  The Club boasted a racquet court and rooms for playing billiards and cards, as well as a reading room and a library packed with books for members to enjoy.

In the late 1880s the New Club opened as a rival attraction.  It had well-built premises with spacious rooms and a fine dining room with an excellent dance floor. Popular smoking concerts were held, where members of the Viceregal Council enthusiastically joined in the choruses.  However the United Services Club was stung into action by the competition. Extensive improvements were made, and private pressure was brought to bear on government officials to support the older club. The New Club was forced into liquidation and the buildings became a hotel. 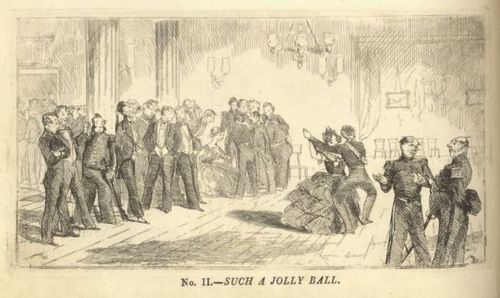 From The Delhi Sketch Book 1 January 1855

Men could also belong to one of several Masonic lodges which held meetings in Simla. The oldest of these was the Himalayan Brotherhood founded in 1838.

An area of flat land known as Annandale became the ‘public play-ground at Simla’.  Picnics, fairs and dances were held there, as well as horse races, gymkhanas, and dog shows.  Sports included polo, cricket, football, archery, rifle-shooting, golf, and croquet.  In 1911 there was a Simla Winter Amusement Club offering badminton, a skating rink, and toboganning.

Amateur dramatics were very popular.  In the late 1830s Emily Eden watched performances in a ‘small and hot, and somewhat dirty’ theatre in Simla.  She wrote of a falling-out amongst the gentlemen actors: ‘One man took a fit of low sprits, and another who acted women’s parts well, would not cut off his moustachios, and another went off to shoot bears near the snowy range’.

A major event of the Simla season was the annual Fine Arts Exhibition.  In the 1860s there was said to be ‘a galaxy of amateur talent in water-colour painting then at Simla’. Money prizes were offered and pictures were sent in from all over India.

The Simla United Services Club closed in 1947 and its collection of books was dispersed. A large number went to the House of Commons and the Empire Society, and the fiction was taken by the Punjab Club. There were thousands of non-fiction books on a wide variety of topics, some perhaps predictable, others less so.  Alongside works on history, government, politics, war, military and naval strategy were books about hypnotism, crime, psychology, psychotherapy, feminism, witchcraft, and spiritualism. The homesick reader of A lonely summer in Kashmir could seek solace in one of a number of works on life back in Britain, such as The Glory of Scotland, Irish bogs, The England I love best, or A dull day in London.

Bear’s grease, bonnets, bellows, biscuits and Bibles - a merchant in Simla in the 1850s

Posted by Margaret.Makepeace at 09:00:00 in Arts and crafts , Domestic life , Leisure