Today Untold Lives features another in our series of postings focusing on extracts from letters written by Indian soldiers serving in France, or recovering from their wounds in the Indian hospitals in England.

In his report for the week ending 8 May 1915, the Censor of Indian Mail wrote that “The prevailing topics of correspondence in the letters are, as usual, despondency as to survival owing to the large number of casualties at the front and a keen desire to return to India. A pleasing feature is the mention of the very good hospital arrangements made for the comfort of the troops”. 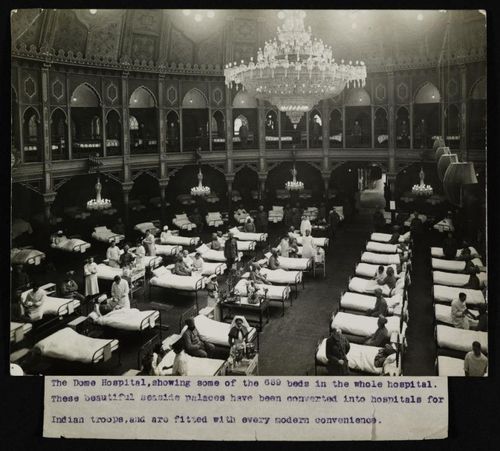 The truth of the Censor’s comments can clearly be seen in an extract from a letter written by Isar Singh of the 59th Rifles, recovering in the Indian General Hospital, Brighton. On 1 May 1915, he wrote in Gurmukhi to a friend in the 30th Punjabis in India.

“The battle is being carried on very bitterly. In the Lahore Division only 300 men are left. Some are dead, some wounded. The division is finished. Think of it – in taking 50 yards of a German trench 50,000 men are killed. When we attack they direct a terrific fire on us – thousands of men die daily. It looks as if not a single man can remain alive on either side – then (when none is left) there will be peace.”

“When the Germans attack they are killed in the same way. For us men it is a bad state of affairs here. Only those return from the battlefield who are slightly wounded. No one else is carried off. Even Sahibs are not lifted away. The battle ground resounds with cries. So far as is in your power do not come here. If you come, get yourself written down ill of something in Marseilles and say you are weak. You will do better to get the Doctor to write down that sickness you have in the head. Sick men do not come to the war. Here things are in a very bad way. In France the news is that dogs churn the milk in machines and look after the cattle. A man who keeps a dog has to pay 5 rupees a month to the King.”

“Do not be anxious about me. We are very well looked after. White soldiers are always beside our beds – day and night. We get very good food four times a day. We also get milk. Our Hospital is in the place where the King used to have his Throne. Every man is washed once in hot water. The King has given a strict order that no trouble is to be given to any black man in hospital. Men in hospital are tended like flowers, and the King and Queen sometimes come to visit them.”