During the interwar period the British endeavoured to retain their dominant status in the Persian Gulf and to promote their interests above those of other countries. They were thus sensitive to the activities – commercial or otherwise – of foreign nationals visiting the region. The build up to the Second World War, and the rise of Nazism in Germany, heightened this sensitivity, particularly towards those who might be German. 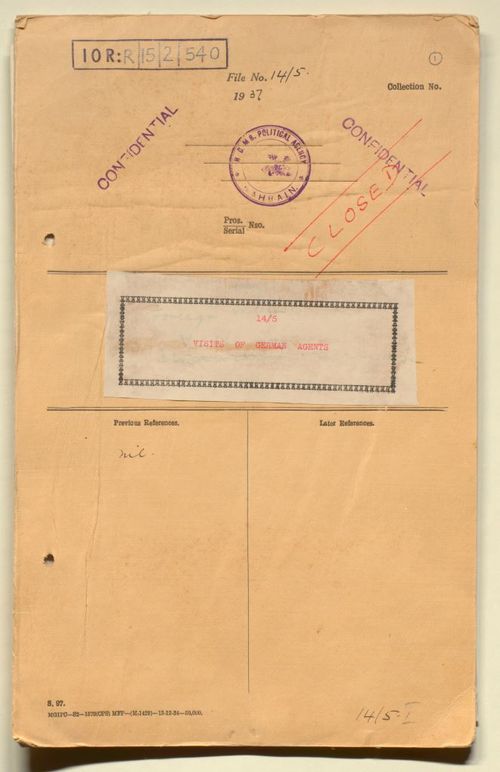 The cover of the file ‘Visits of German Agents’, part of the India Office Record being digitised by the British Library-Qatar Foundation Partnership

On 9 July 1937, Captain Gerald de Gaury. the Political Agent at Kuwait, wrote to his superior in Bushire, Lieutenant-Colonel Trenchard Fowle, the Political Resident in the Persian Gulf, with notes on the visit to Kuwait of August Lindt and his wife, Susan Dunsterville. Lindt, a Swiss subject, was in the region on behalf of the Swiss newspaper Bund. He had aroused British suspicions by also being employed as a correspondent for a Berlin news agency.

Evidently perturbed by the man’s behaviour, de Gaury described Lindt as ‘extremely journalistic in manner and generally very inquisitive’. The Political Agent fretted about having to accommodate the couple in the Agency with no advance notice, although, as he admitted, this wasn’t such a bad thing: ‘as I was able to keep an eye on them'. Despite Lindt’s Swiss nationality, de Gaury was convinced that he was in fact German. 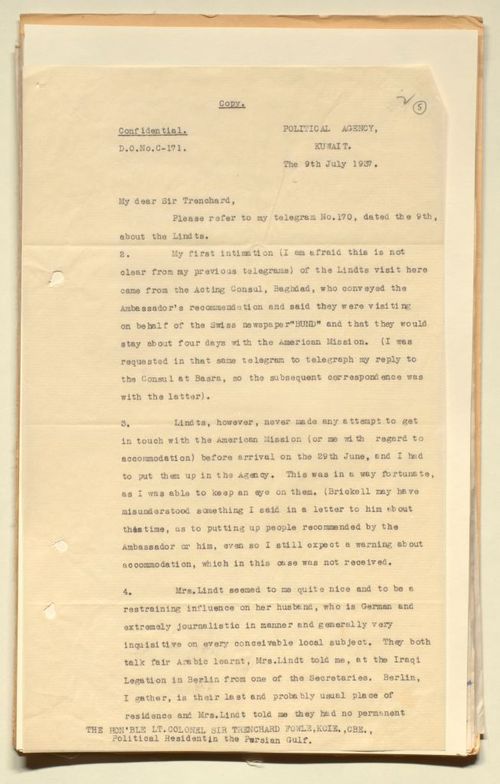 This belief was fuelled by Lindt’s ‘long talks’ with Dr Fritz Grobba, the German Minister in Baghdad. The fact that he could speak Arabic and had talked subversively about his plan to overthrow the Liberian Government – having previously visited the country – with the help of a ‘Hinterland chief’ all fed suspicions about his true intentions. Fowle’s verdict was unequivocal: ‘I have no doubt myself that […] he […] sends reports to the German Government’.

After a week in Kuwait, the Lindts travelled on to Bahrain, possibly allowed such freedom of movement only because of Dunsterville’s British origins. While in Bahrain they stayed in the home of the RAF Air Liaison Officer, Aubrey Rickards, who was absent at the time. Rickards complained that when alone in his house, the couple 'went over all his things that they could get at including the contents of his drawers and photograph albums'.

Much less suspicious of Lindt’s intentions, the Political Agent at Bahrain, Tom Hickinbotham nevertheless reported the journalist’s ‘great interest in the people and the place’ and that he asked ‘a series of questions’. During a visit to the pearling banks Lindt is said to have taken ‘a number of photographs’. However, he felt that they had ‘conducted themselves quite well’ and did not share de Gaury’s belief that Lindt was German, though he showed his British prudishness by noting with disapproval the ‘somewhat continental […] way in which they discussed their private lives’. 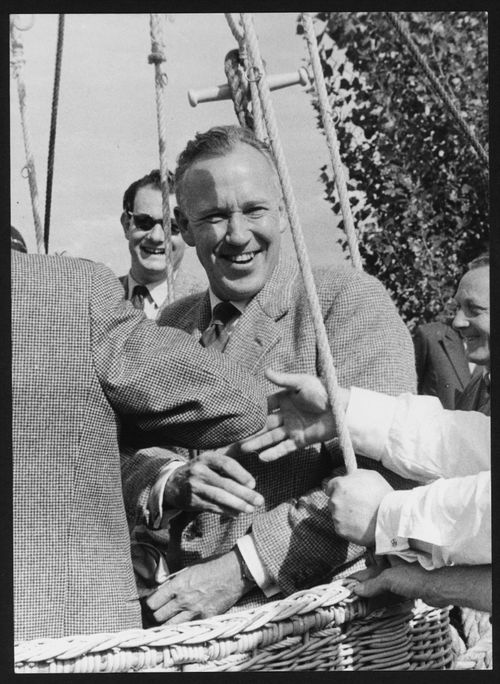 Although clearly a man with a strong personality, an inquisitive nature, and colourful ambitions, the British were wrong to suspect August Rudolf Lindt of being a German agent. Not long after his tour of the Gulf he returned to his native Switzerland and became a leading figure of the Swiss resistance during the war and a critic of his government’s appeasement of Nazi Germany. After the war, as well as several diplomatic positions, his career was notable for its humanitarian work, including time as Chairman of the Board at UNICEF and an appointment as UN High Commissioner for Refugees between 1956 and 1960.

Posted by Margaret.Makepeace at 09:00:00 in Politics , Qatar