Must I break my promise or lose my bread?

In December 1832 the East India Company was accused of seeking to influence the outcome of the general election in Finsbury. A letter from ‘A.Z.’ appeared in The Times on 10 December: ‘I know the fact that the East India Company are requiring the people employed in their warehouses to vote for Serjeant Spankie and Mr. Grant for the borough of Finsbury; I ascertain it from several voters who had promised to give their votes for Mr. Babbage having, in consequence of orders from the Company, broken that promise’.

Candidate Charles Babbage, the mathematician and computer pioneer, published an address to the electors of the borough: ‘A powerful corporate body is exerting itself against me; but the people are too firm and too enlightened to allow themselves to be cheated out of their newly recovered rights’.

Robert Grant and Robert Spankie were elected as the two MPs for Finsbury.  Spankie was linked to the East India Company through his marriage to the daughter of director John Inglis and his service as Advocate-General in Bengal.  Babbage came third, nearly 400 votes behind Spankie. 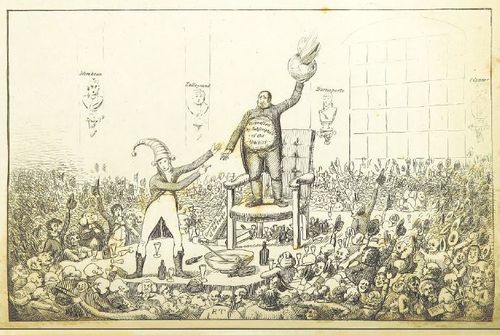 From G. Huddesford, The Scum uppermost when the Middlesex Porridge-Pot boils over!!  (London ,1802)

The controversy rumbled on in the pages of The Times with James Bischoff, chairman of Babbage’s election committee, adding his voice.  Bischoff claimed that:  ‘…lists of persons employed in the warehouses of the company and having votes were made out, and cards were sent to those persons, requesting them to vote for Sergeant Spankie. Could these lists be made without the order of persons in authority? and would it not be a natural question for a man having a family dependent upon the East India Company, and having promised his vote to another candidate, to ask himself must I break my promise or lose my bread?’.

Peter Auber, Secretary of the East India Company, was outraged at the allegations and wrote a lengthy rebuttal to the newspaper which was published on 15 December.  He stated some ‘simple facts’ in opposition to Bischoff’s allegations.  There were 42 Finsbury voters employed in the Company’s warehouses.  Lists were made of voters in the warehouses for all places in the United Kingdom, and no addresses were included.  This had been the practice for the past 40 years or more, intended to allow voters unrestricted leave of absence on application.  The lists were kept by head clerk William Simons and not shown to anyone outside the office of the Committee of Warehouses – no director had ever asked to see them.  Simons had assured Auber that he had never interfered with the choices made: when a voter asked him about anything on the subject, he told him to do just as he liked.  Auber also said that it was his firm conviction that Spankie had not solicited, directly or indirectly, the vote of any individual, knowing him to be a servant of the Company.

Auber ended with this statement: ‘I have thought it my duty, in the station which I hold as Secretary to the Court of Directors, and in vindication of their officers, who appear to me to have been aspersed by Mr. Bischoff’s insinuations, to make this statement without any communication whatever with any member of the hon. Court, and for which statement I am alone responsible’.

Posted by Margaret.Makepeace at 1:00 PM