The People’s Charter, first distributed on 21 May 1838, consciously drew its name from Magna Carta, or the Great Charter, sealed by King John at Runnymede in 1215. This small book launched the Chartist movement – the first mass working class movement in British history – that agitated to achieve radical political change 1838-1858. Whereas Magna Carta secured the elite barons their liberties and rights, this People’s Charter hoped to win political rights for the working class and complete the process begun in 1215. In allying themselves with Magna Carta, the Chartists cleverly represented their cause as one that was based in historical precedent and which had an ancient authority that was the ‘birthright’ of all British citizens. 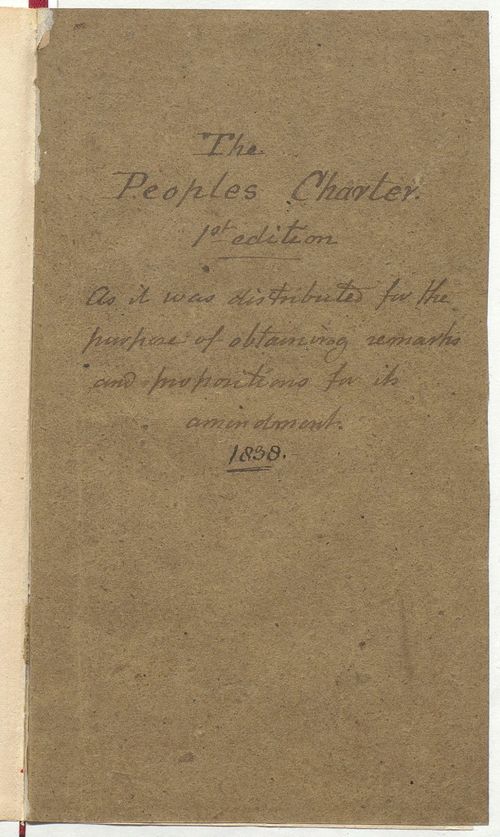 Chartists were not always strictly accurate in their historical interpretation of Magna Carta and what it actually said, but they were effectively using Magna Carta as a symbol of freedom upon which they could graft their own political ideas. One Chartist demagogue – Joseph Rayner Stephens – erroneously invoked Magna Carta as enshrining a right to free speech, freedom of association and freedom of worship, none of which were mentioned in Magna Carta. Yet, the simple invocation of this document lent his claims legitimacy. At a great Chartist meeting near Leeds, Stephens announced:
We are seeking nothing new…Our forefathers have set up landmarks – landmarks of law – landmarks of right, landmarks of liberty; these landmarks we are determined to have restored. (Cheers) We stand upon our old rights – we seek no change – we say give us the good old laws of England unchanged (Cheers)…and what are those laws? What is that constitution by which we seek to abide? – (Magna Charta) – Aye, Magna Charta! The good old laws of English freedom – free meetings – freedom of speech – freedom of workshops – freedom of homesteads – free and happy firesides, and no workhouses. (Cheers) 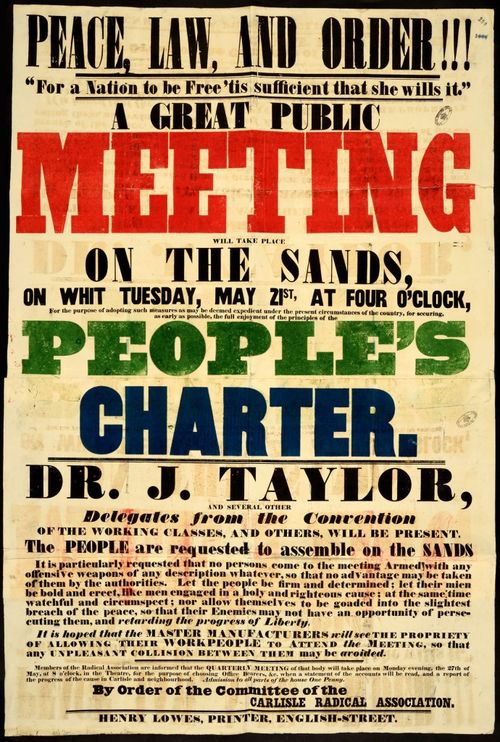 The six points outlined in The People’s Charter, were:
1. Universal male suffrage
2. No property qualification to be a Member of Parliament
3. Annual Parliaments
4. Equal representation
5. Payment of MPs
6. Secret ballot

Radicals had been pushing for this reform programme since at least the 18th century. What was new was the pithy name and the sophisticated manner in which they agitated for them. The invocation of Magna Carta was crucial in this and certainly caught the public imagination.

The Radicals’ interest in Magna Carta had grown over the previous quarter century, fuelled by an explosion of radical reform publishing which almost always invoked the Great Charter as a symbol of ancient British liberties that were being infringed upon by a corrupt and unrepresentative political elite. To attract followers, the Chartists always inserted the ‘h’ in the word ‘Magna Charta’ to emphasise subtly the affinity between their Charter of liberties and the Great Charter of 1215. The Chartists principally agitated for reform through presenting petitions to Parliament, the largest of which was submitted in 1842, written on paper some 6 miles long, weighing 48 stones (more than 300kg!) and containing the signatures of upwards of 3,317,702 people, one third of the adult population of Great Britain. 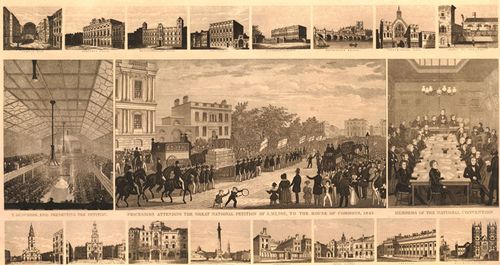 Ultimately, the Chartist movement would fail in its attempt to achieve lasting political reform. Yet the Chartists created a rich political culture that continued to question the social values dominant under industrial capitalism throughout the 19th century and placed the demand for universal suffrage at the heart of future debates concerning the amelioration of working class lives.

Posted by Margaret.Makepeace at 09:00:00 in Politics , Reform