On 17 May 1817, farmer Samuel Jessup died at his home in Heckington Lincolnshire.  His death was widely reported in the press, not because of any suspicious circumstances, but as a result of Jessup’s remarkable ‘propensity for pills’.

The Lincoln Assizes of March 1817 heard an action brought against Jessup by John Wright, surgeon and apothecary of Bottesford.  Wright wished to recover a large debt of £787 18s for medicines and attendance provided to Jessup over a period of 25 years.  Jessup was described as ‘a bachelor of opulence… of an hypochondriacal turn’.  Besides real complaints, Jessup had also ‘a diseased fancy’. Wright used to send him from 600 to 2,000 pills at a time - in one year Jessup took 51,000.  In addition, Wright had supplied 40,000 bottles of mixtures. 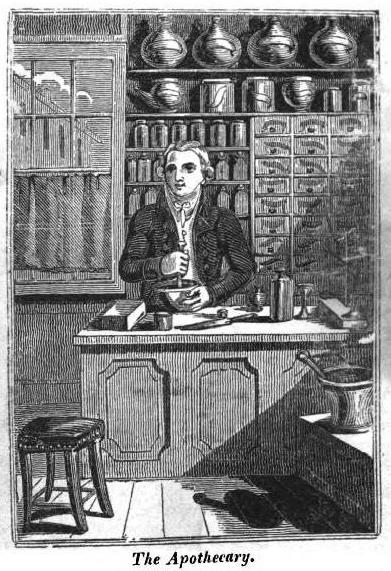 The Apothecary from The book of English trades, and library of the useful arts (London, 1821)

Jessup  described his daily routine since 1796: ‘At half-past two o’clock in the morning, I take two spoonfuls and a half of jalap, and then a quantity of electuary; then I sleep  till seven, and repeat the dose of both jalap and electuary: at nine o’clock I take fourteen pills of No. 9, and eleven pills of No. 10, to whet my appetite for breakfast; at breakfast I eat a basin of milk; at eleven, I have an acid and alkali mixture: afterwards I have a bolus: and at nine at night I have an anodyne mixture, and go to sleep’.

A compromise was reached whereby Wright accepted a verdict for payment of £450. Two months later, Jessup was dead. He was buried at Heckington on 20 May aged 64.  Newspapers expressed surprise that he had survived to such an advanced age nothwithstanding ‘a most inordinate craving for physic’.

Posted by Margaret.Makepeace at 09:00:00 in Health