This week Untold Lives brings you two tales of poisoning found in the annual reports of the Chemical Examiner to the Government of Madras for 1901 and 1902.

Our first example concerns an overzealous attempt to catch a thief:

The second concerns an attempt to poach a neighbour’s business:

These cases of poisoning were highlighted by the Chemical Examiner in his annual report as being particularly note-worthy, and appear in the section on Medico-Legal Investigations. Alongside human and animal poisonings the Examiner investigated a number of miscellaneous cases, including counterfeit coining, a case of disputed handwriting, and the examination of a number of articles concerned in a case of explosion and suspected incendiarism.

By far the largest section of the report concerns analyses performed for the Customs Department and the Board of Revenue: 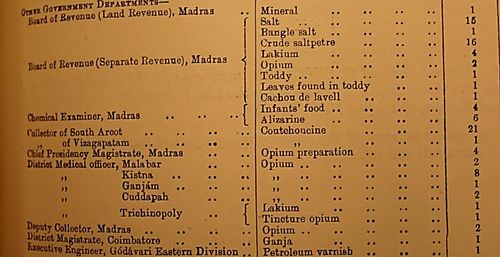 Reports of the Chemical Examiners can be found via the online catalogue in the IOR/V/24 series, and scattered through the IOR/P Proceedings.

Arsenic, Cyanide and Strychnine - the Golden Age of Victorian Poisoners

Posted by Margaret.Makepeace at 09:00:00 in Crime , Health , Science and environment