Death of armed robbers in India

In British India, it was the responsibility of the Political Agents to report on matters of law and order concerning the Princely States. The collections of the Board of Control in the India Office Records are full of such reports, and they often give fascinating accounts of the efforts of the authorities, whether it was British officials or the servants of Indian Maharajahs, to bring criminals to justice.

One such report was forwarded to the Bombay Government by Captain W Lang, Political Agent in the Mahi Kantha, in August 1843. The report, and attached depositions, describes the efforts to bring some armed robbers to justice by horsemen of the Raja of Ahmednagar and a group of local people. A group of four men of the Purriar Meenas tribe in Rajasthan, photographed by Eugene Clutterbuck Impey in the early 1860s Online Gallery

The three robbers, mounted on camels, set upon a group of Udaipur Banyans a couple of miles from Ahmednagar, plundering them of two camel loads of property. A party of the Raja’s sowars were quickly sent off in pursuit with explicit orders to bring back the stolen property even at the risk of their own lives. With the help of a local guide, who amazingly was only 13 years old, they quickly discovered the robbers who had halted for the day in a deep ravine near the village of Polajpur. Devy Singh, the Jemadar leading the sowars, approached the robbers and asked them to lay aside their weapons and surrender. They replied that “their weapons would be given only with their lives and that if he were strong enough to take them to come on”. The Jemadar promptly opened fire, and in the ensuing firefight Devy Singh was shot in the head and killed. The remaining sowars then recruited some of the villagers to help them take the robbers into custody. However the bandits put up a determined resistance, and in the fierce fighting which took place all three robbers were killed, along with three of the villagers. The report also notes that one of the Raja’s horses was killed. 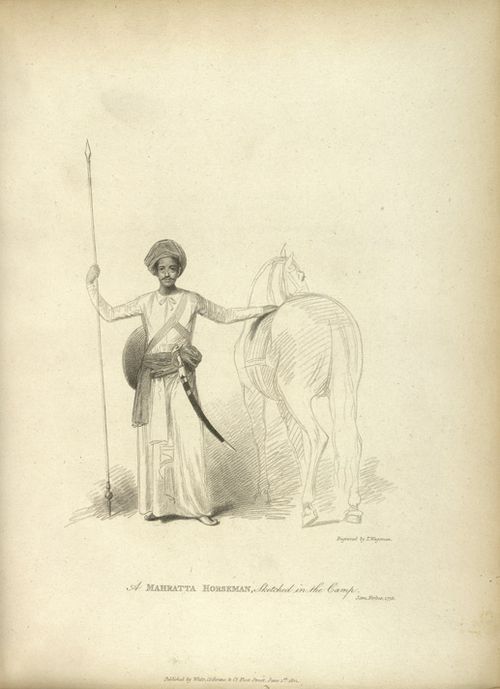 By chance Captain Lang was camped near Ahmednagar, and was able to carry out an immediate investigation of the incident. He could discover little about the robbers except that they were Hindu and probably Rajputs from Marwar or the desert tracts beyond that Province. Captain Lang recommended that the Raja be presented with an Arab stallion from the Government Stud as a reward for the efficient measures he took for pursuing the robbers and that 500 rupees be made available in order that some provision could be made for the families of the slain villagers. Unfortunately the Bombay Government saw no reason why they should incur such an expense, and instead ordered that the “high satisfaction of Government may be expressed to the Raja of Ahmednagar with the energy displayed by those employed under his orders”. The villagers were advised to claim salvage from the owners of the stolen property.

Further Reading:
Affairs of the Mahee Caunta [Mahi Kantha], Vol 6: Case of three robbers who were put to death by a party of Ahmednagar sowars and from whom certain stolen property was recovered by these horsemen [IOR/F/4/2070/95181]

Any idea what the stolen property was? It must have been pretty important to cause such an incident.