The Battle of Waterloo in 16 objects

It is 200 years since the Battle of Waterloo was fought in fields south of Brussels, on 18 June 1815. The battle saw the expansionist ambitions of the French Emperor Napoleon Bonaparte shattered, with his defeat by the Duke of Wellington’s Anglo-Allied army, and the Prussian army under Marshal Blücher.  The British Library is marking the anniversary with a display of 16 unique historical documents, artworks, literary manuscripts and rare printed texts. Here is a taste of what is on display.

Napoleon had conquered much of Europe before being beaten and exiled to the island of Elba in 1814. On 26 February 1815 he escaped and returned to Paris, intent on regaining his empire. This satirical etching, probably by George Cruikshank, depicts Napoleon as a fox running towards Paris. Geese carry the news to the Congress of Vienna, which had been developing a peace plan for post-Napoleonic Europe. 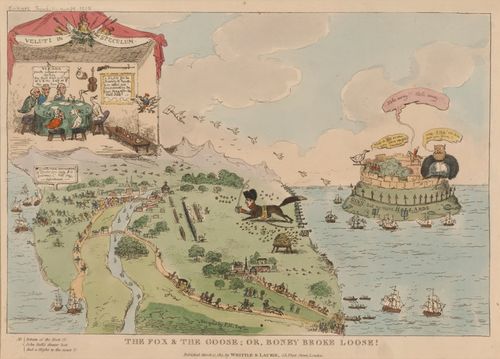 The Congress immediately branded Napoleon an outlaw. The original draft of their ‘Declaration of Outlawry’ is on display alongside the etching.

The centrepiece of the display is the Duke of Wellington’s own account of the Battle of Waterloo, which he probably partly drafted on the battlefield and completed in Brussels.  In his ‘Waterloo Despatch’, Wellington wrote that ‘the attack succeeded in every point; the enemy was forced from his positions on the heights and fled in the utmost confusion, leaving behind him as far as I could judge 150 pieces of cannon with their ammunition which fell into our hands’.

Also featured is this early plan of the battlefield drawn by John Wilson Croker, a close friend of the Duke of Wellington and therefore someone with access to accurate information. Wellington’s forces are shown in red, and the Prussians in black. The various stages of the French advance are depicted in blue. To the centre left is the farmhouse at Hougoumont, which was fiercely contested during the battle. 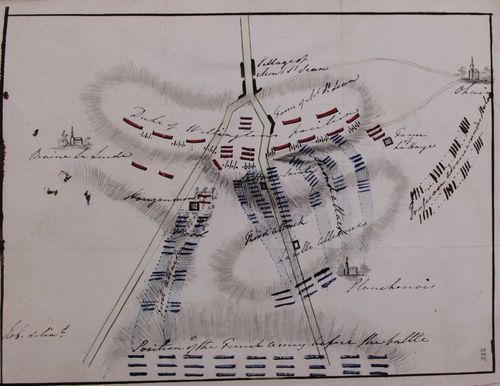 The army officer and military historian William Siborne was commissioned in 1830 to build a model of the Battle of Waterloo. He sent a circular to surviving officers requesting information on the layout of the battlefield. The replies he received provide unique eyewitness reports of the battle. In this one, Captain Charles Fairfield describes – and illustrates – a ‘sort of “defense” which was erected inside the wall at Hougoumont’. 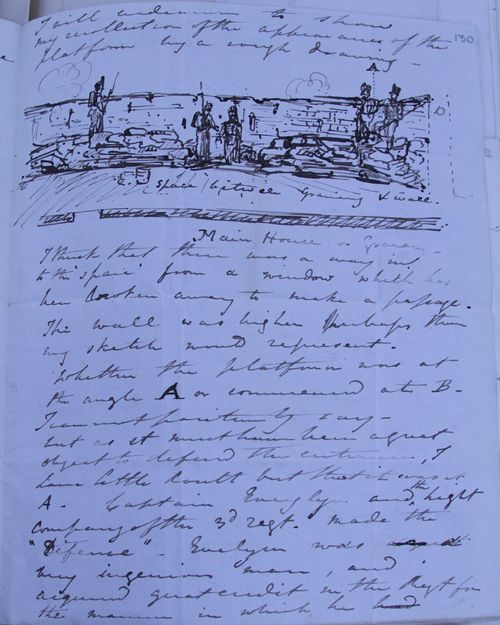 After the battle, Napoleon was captured by the British. This sketch by John Elliott shows the formation of ships while Napoleon was being transferred to the HMS Northumberland, before being transported to St Helena.  The list of wine provided to Napoleon on St Helena is also on display. 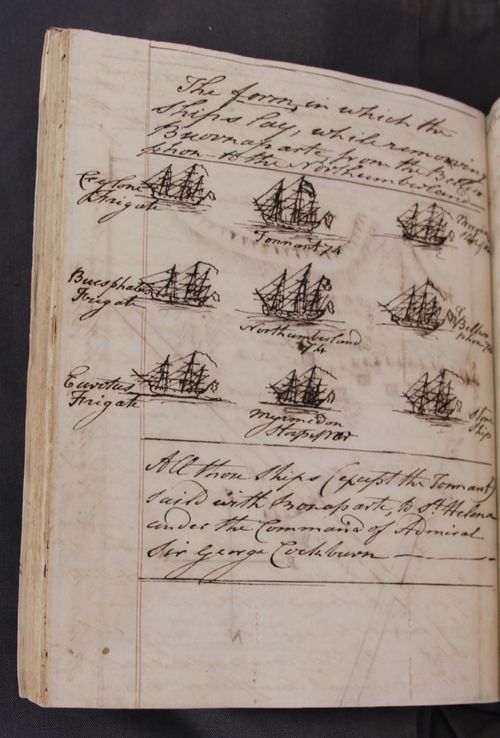 With Napoleon’s defeat came a period of relative peace and stability in Europe, but one gained at an enormous price, as both sides suffered terrible losses. The final section of the display is devoted to literary and musical responses to the carnage of Waterloo, and includes original manuscripts of Lord Byron and Thomas Hardy.

The free display “Waterloo: War and Diplomacy” runs until 6 September 2015 in the British Library’s Treasures Gallery.