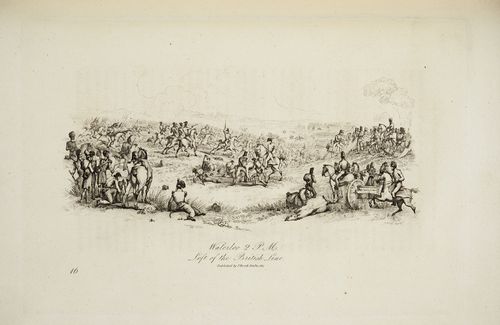 The Battle of Waterloo, also of Ligny and Quatre-Bras described by ... a near observer ... [A narrative by C. A. Eaton, with a sketch by J. Waldie. With other matter... from sketches by Captain G. Jones.] Tenth edition, enlarged and corrected, (London, 1817). G.5651

An interesting insight into conflicting political and personal feelings in the aftermath of the battle can be found in two letters sent by the British politician George Canning (1770-1827) to the Portuguese general Colonel Dom Miguel Pereira Forjaz, 9th Count of Feira (1769-1827). Canning had been British Ambassador to Portugal since November 1812, tasked primarily with improving relations with the Portuguese government. When Napoleon escaped from the island of Elba on 26 February, 1815, the Portuguese refused a British government request to provide troops for the anti-Napoleonic alliance. Canning did his utmost to persuade the Portuguese to cooperate right up until the final victory at Waterloo. That the British were a little displeased with the Portuguese is reflected in Canning’s letter to Colonel Forjaz dated 5 July, 1815 only 17 days after the battle.

As an Englishman, & a friend of the Duke of Wellington, it is necessary to say how much I rejoice on this glorious occasion. I would that I felt no cause for regret as a good Portuguese! But it is mortifying that Portugal should stand forth in the face of Europe the only Power that has directly declined to take any part in the contest so happily begun, &, I think we may say, concluded!

Canning’s understandable triumphalism was to be cut short by the news that his cousin, Charles Fox Canning, one of Wellington’s aide-de-camps, had been killed at Waterloo. In a letter to Forjaz dated 13 July, 1815 Canning writes:

I find on my table your very kind letter of yesterday. The loss of my cousin was indeed a great drawback to me on the joy which the Victory of Waterloo (the final salvation of Europe) was calculated to inspire. He had gone through all Lord Wellington’s Campaigns with Him from the beginning to the end of the Peninsular War, and hitherto had partaken of the good fortune of His Commander, - never being even touched by a ball. In this last battle the Duke exposed himself the whole day to the very front of danger. In consequence but one of his aide-de-camps escaped unhurt. My cousin was one of two who had the glory of falling by his side.

Although the display of grief is quite formal you can still get an idea of Canning, in essence, trying to balance national political interest with a deep personal grief, his own, and that of his cousin’s family.

the good character which I had received of him from Lord Wellington, justified & proved by the manner of his death, makes me deeply sensible of the loss sustained by his family.

The images of the archives are taken from the George Canning Collection, Add MS 89143, which is being catalogued by the author of this blog.

A free display, Waterloo: War and Diplomacy, runs until 6 September 2015 in the British Library’s Treasures Gallery.