John Malcolm left his school and family in Scotland at the age of 13 and joined the East India Company. He rose through the ranks, eventually becoming Governor of Bombay.  During the Mysore war of 1798, he formed a lifelong friendship with the governor-general Lord Wellesley’s brother Arthur, the future Duke of Wellington.

After spending time in Persia as a British envoy and then returning to India, Malcolm returned to England for five years’ furlough. Wellington advised him to try to get into Parliament.

Just after the Battle of Waterloo, Malcolm received a personal invitation from the Duke of Wellington to join him in Paris to celebrate the victory.  On his way to Paris, in July 1815, Malcolm passed by Waterloo. From his diaries we can read his account of the visit of what had already become in a month ‘one of the most celebrated battle-fields ever named in the history of the world’. 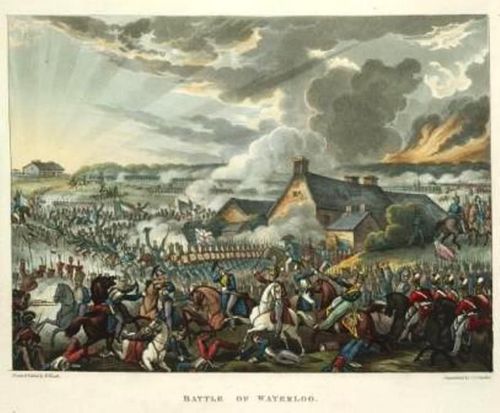 The Battle of Waterloo from The Wars of Wellington, a narrative poem by Dr. S. (London, 1819)  Images Online

On the morning of 20 July, Malcolm rode out to Waterloo. It was with no ordinary emotion that he contemplated the scene, an expanse of farm-land which had suddenly risen out of  obscurity. His feelings were those of mingled exultation and regret. A glorious victory had been achieved, and he had not been there even to witness it.

"As I approached this field of fame," he wrote in his journal, “my feelings of exultation as an Englishman were checked by a recollection that I had personally no share of the glory of that wonderful day. To have been even a spectator in such an action must give fame for life." General Adam sent his aide-de-camp to explain to Malcolm “the particulars of the position of the two armies". Malcolm spent three hours on the field, and jotted down in his note-book many particulars of the great battle.

Malcolm was one of the first tourists visiting Waterloo’s battlefield and his account shows an early sacralisation of the site. The Battle modified the itinerary of European travel from Britain after 1815, with Thomas Cook later promoting it as a destination. Even today Waterloo is still one of Belgium’s most important tourism sites.

Having thus visited Waterloo, Malcolm proceeded onward to Paris to spend about a month with the Duke of Wellington.  His old friend received Malcolm cordially and invited him to all the celebratory activities being held in the French capital.

After his return to London, Malcolm became a literary celebrity on the publication of his History of Persia.  He sailed again for India the following year.

Malcolm eventually returned to the UK and became a Member of Parliament in 1831, supporting his friend Wellington during his time as Prime Minister.

More on John Malcolm  - Diamonds at the Court of the Shah