The Viceroy of India’s Personal Report to the Secretary of State in London dated 18 July 1947 makes interesting reading.  As you might expect, Lord Louis Mountbatten provided a great deal of information about the business of the Partition Council which was meeting three times a week. However there are some passages which show that the political elite in Delhi was not concentrating solely upon the future of an independent India.  Amidst the meetings, negotiations, letter writing and press conferences, time was found to attend social events.

‘I gave a large dinner party on the 14th July in honour of the French community, in celebration of their national day, which was attended by members of the Government and many other Indians; and speeches were exchanged in French.

This morning, Friday the 18th July, I held an investiture in the Darbar Hall, and this evening we are giving a large dinner party attended by Nehru with the whole Cabinet, Jinnah, and several of the Princes, to celebrate our silver wedding. If I may be forgiven a personal  reminiscence, it was in the old Viceregal Lodge here that I became engaged over 25 years ago.  Several of the Ruling Princes who are coming were on the Prince of Wales’s Staff with me at that time’. 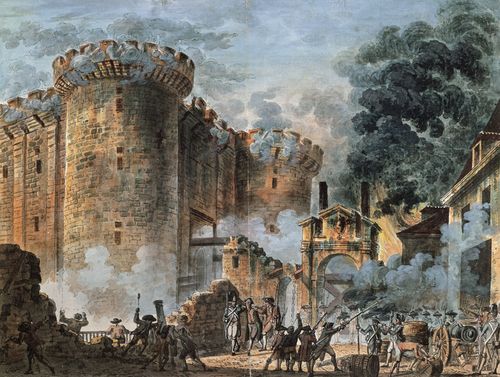 The storming of the Bastille, 14 July 1789. ©De Agostini/The British Library Board Images Online

Events in London in 1947 meant that both Bastille Day and 18 July were significant days in the history of India. On 14 July 1947 Prime Minister Clement Attlee introduced the India Independence Bill into the House of Commons.  The Bill went through three readings in the Commons and was given the Royal Assent on 18 July.  The India Independence Act provided for partition leading to the establishment of the dominions of India and Pakistan from 15 August 1947.

The Yorkshire Post and Leeds Intelligencer carried an article entitled Ending an Empire:

‘When a Royal Commission announced to-day in the Lords the Royal Assent to the India Independence Bill, the procedure- though it marked the end  of an Empire and created two new Dominions- differed in no respect from that used for the least important legislative measure.  The Bill was named in the middle of a fairly long list of measures which included the Havant and Waterloo District Council Bill and the South Metropolitan Gas Bill. One had indeed to listen closely as a clerk of the House read the titles, and the centuries-old formula, “Le Roy le veult” was spoken’.

Posted by Margaret.Makepeace at 09:00:00 in Leisure , Politics , Reform