In the second half of 1919, three Indian women, Sarojini Naidu, Herabai Tata and Mithibai Tata, were in London to address the Government as final readings of the 1919 Government of India Bill were being put through Parliament. They travelled to Britain to urge the Government to remove the sex disqualification that explicitly excluded women in India from the franchise.

Mother and daughter, Herabai and Mithibai Tata, were from Bombay and were on their first visit to Britain. They toured the country meeting with various women’s groups looking for support and advice. Their statement ‘Why Should Women Have Votes?’, sent to the India Office on 25 September 1919, laid out a number of reasons for Indian women to have the vote:

It has been recognised now in all countries that the sex barrier has been a grave mistake, is out of date, unworthy of the times, a relic of past days when might was above right … Why should India lag behind others in this respect and create a sex barrier where one does not exist, and thus brand Indian women as inferior to their sisters in other countries. 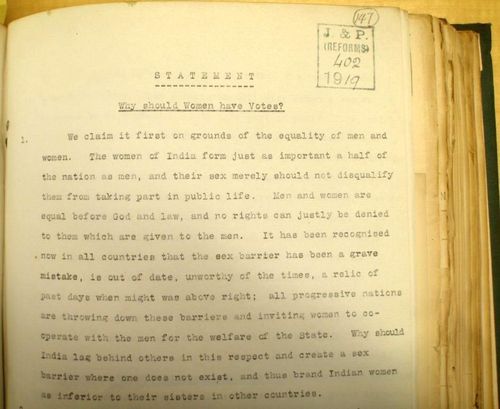 In their support, as might be expected, the main women and suffrage organisations in Britain, the Women’s Freedom League, the National Union of Societies for Equal Citizenship and the National Council of Women of Great Britain and Ireland sent letters and resolutions to the India Office. However, the India Office soon became inundated with letters of support from individuals and local associations across the breadth of Britain.

They included resolutions from three different groups in Glasgow. The Study Circle, Glasgow, sent the following on 17 September 1919:

That this meeting, approving of the principle of equality in the citizenship of men and women, urges that, in the Government of India Bill, women having the same qualifications as men should be included in the franchise proposals; so that popular government in India may start without any sex disability. The Tatas then went up to Scotland and engaged in an impromptu meeting that led to the following resolution sent on 24 November 1919:

That this meeting of Glasgow Citizens approves the principle of the extension of the franchise to Indian women as well as to the men of India, and asks that they shall be included on the same terms as men, in the franchise proposals being considered in the Government of India Bill.

Similar resolutions were sent between September and December 1919 from the Glasgow Society for Women’s Suffrage, a public meeting of Newcastle citizens, the Huddersfield, Bristol and Manchester branches of the Women’s International League, the Liverpool Council of Women Citizens, the Cardiff Branch of the Britain and India Association, the Letchworth and Swansea branches of the Women’s Freedom League and the New Cross Branch of the National Co-operative Men’s Guild among many others.

These petitions were unsuccessful as the Government of India Bill did not include women into the franchise, but the Government did concede autonomy to Indian provinces to enfranchise women, which they started to do from 1921.