I’ve spent several years studying the science and showbiz of hypnosis. As artist-in-residence at the British Library, I looked into the archives at great hypnotists from the past.

Henry Blythe is one of my favourite hypnotists from the archives.  He was a stage hypnotist who crossed over the great divide into healing – the field he called ‘curative hypnosis’.  His wonderful book The Truth About Hypnotism is unintentionally hilarious in authorial style and content, but surprisingly moving.  It’s a great mixture of fascinating theory, showbiz anecdotes and very slightly purple - a sort of wisteria - prose. 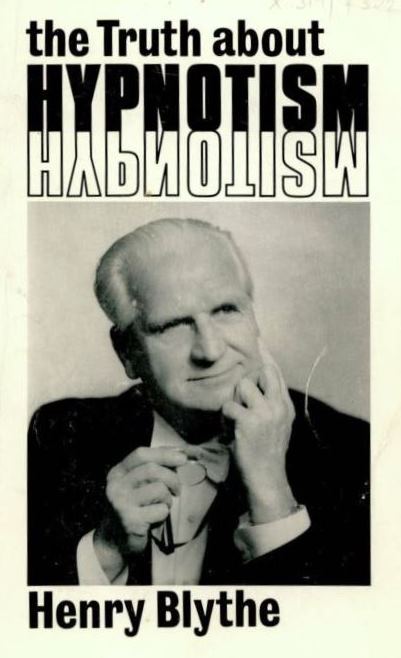 Cover of Henry Blythe's The Truth about Hypnotism

The chapters I like best are ‘1969: The Year of the Warts’, and ‘The Twilight Zone’ which deals with his attempts to cure homosexuality and sexual perversions. He seems genuinely conflicted about whether homosexuality could and indeed should be eradicated, and he was way ahead of his time in his compassion.

I love hypnotists Walford Bodie and Peter Casson, and the lady mesmerist Annie De Montford.  I love the big moustaches and the over the top bill matter.  But it is Blythe I’ve warmed to the most.  He is warm, humble - and at the same time an incorrigible self-promoter. He stood for Parliament as the Labour candidate for Gloucester under the slogan Look into my Eyes and Vote for Me.

Blythe’s stunts included hypnotizing the entire team at Gloucester City Football Club to improve their performance. Pathe News made a feature about his attempt: Svengali Means Goals - “They won that match. The next when Henry was away – they lost. That speaks for itself!” At the time this would all have been thought of as harmless fun, but now hypnosis in sports science is big business, helping everyone from professional boxers and endurance triathletes to committed amateurs overcome their ‘limiting self-beliefs’.

Henry popped up again in 1960 with a bizarre stunt to hypnotise learner drivers, so that they would pass their driving test.  He was pictured in the press gazing deep into the eyes of his daughter Sally, as she sat at the wheel of her car. She later went on to fail her test, a fact the local newspaper reported with glee. Thank goodness Blythe cleared the road of traffic before trying this experiment.

Blythe has his own Facebook page run by an enthusiast who became slightly obsessed with the great man after hearing his Stop Smoking album.  In it, Blythe very kindly suggests, in trademark gracious style, that ‘you might like to think about stopping this filthy habit, if it’s all the same to you.’ He employs his pioneering techniques of ‘grip and glare’ and his ‘hypnotic sponge’ to stop the listener wishing to smoke ‘completely, utterly and entirely’.

Despite being kitsch, slightly foolish, and a bit of a duffer, Blythe is wonderfully genuine in his aims to effect positive transformations in people’s lives.  He sums up for me the wonderful range of this subject, something that is reflected in my work on stage in The Singing Hypnotist. Flashy, ambitious, yet ultimately humane and with the possibility of transformation.  That is why Henry Blythe delights me so much. 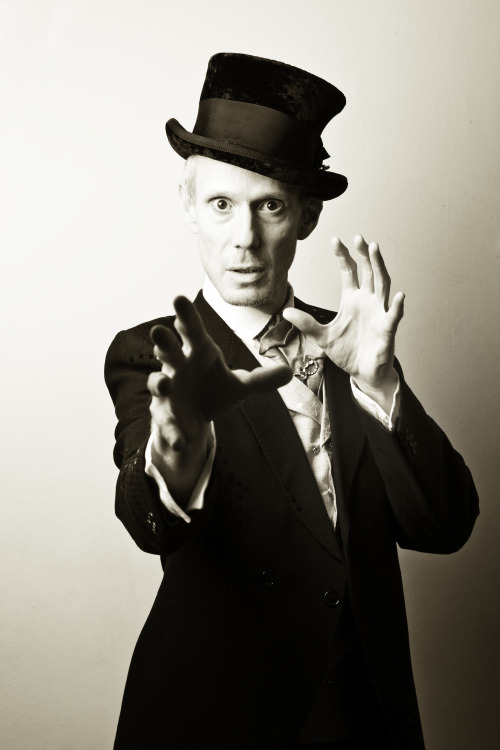 Christopher Green as The Singing Hypnotist

Christopher Green
Performer and writer, the first Artist in Residence at the British Library @kit_green

Christopher's book Overpowered! The Science and Showbiz of Hypnosis will be published by The British Library in October.

Posted by Margaret.Makepeace at 09:00:00 in Health , Science and environment