Miss May Oung at the Burma Round Table Conference 1931

On 29 September 1931, the Government announced the 20 Burmese delegates who would be attending the Conference. They included representatives from different political parties and minority groups, but no women.

After the announcement various British women’s organisations, such as the Women’s Freedom League and the Six Point Group, sent letters to the Secretary of State, Sir Samuel Hoare, hoping it was not too late to include one or more women. In particular, the name of Miss May Oung was put forward because she was conveniently already in London. 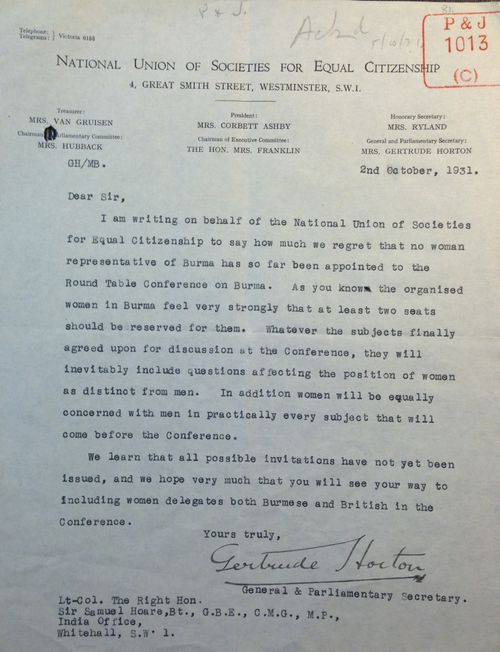 Miss May Oung (also known as Ma Mya Sein) was Rangoon and Oxford educated, had been Secretary of the Burmese National Council of Women and Burmese Women’s Association and representative of the All Asian Women’s Conference at the League of Nations in Geneva. Her education and international experience made her an ideal representative in British and Burmese women’s minds. As Emmeline Pethick-Lawrence pointed out in a letter sent to Samuel Hoare on 29 September 1931, women in Burma enjoyed an equal franchise with men (they had since 1922) and so should be included in the Conference. Burmese women, who had held a mass meeting in Rangoon, pointed out that two Indian women had been delegates to the Indian Round Table Conference (even though Indian women did not enjoy equal franchise) and so at least two Burmese women should be sent as representatives at this Conference.

However, the Governor of Burma, Sir Charles Alexander Innes, did not wish to appoint May Oung. In various telegrams to the Secretary of State in October 1931, the Governor suggested that May Oung’s Aunt, Mrs Hla Oung, who was Vice President of the Burmese Women’s Association, would be a better candidate. Hla Oung insisted that she would need May Oung to accompany her on account of her age and language difficulties, but Innes believed that May Oung was too young and that the Burmese men would not approve of her appointment. He also did not want two women delegates, who would be in favour of separation of Burma from India, as that would upset the political balance of the delegation. Innes agreed to compromise by allowing May Oung attend the Conference as her aunt’s advisor, but not to be named as a formal delegate. This suggestion was not well received, leading to a standoff. Hla Oung insisted on two women delegates and threatened to arrange a boycott by the whole Burmese delegation. 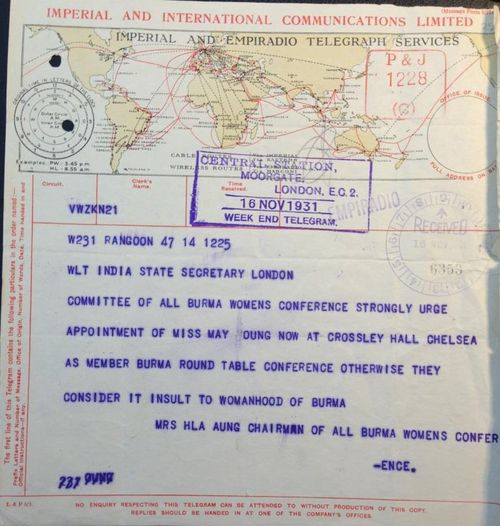 British and international women’s organisations, such as the Women’s Freedom League and Equal Rights International, petitioned the India Office once more for the inclusion of May Oung on the delegation.

Finally, the male Burmese delegates themselves, on their arrival in London in November 1931, sent a letter to Hoare asking that May Oung be included in their delegation. Innes eventually relented after getting written assurance from the Burmese Women’s Association that they would be happy with one delegate. On 20 November 1931, Miss May Oung was formally invited to attend the Burmese Round Table Conference. She accepted the invitation. 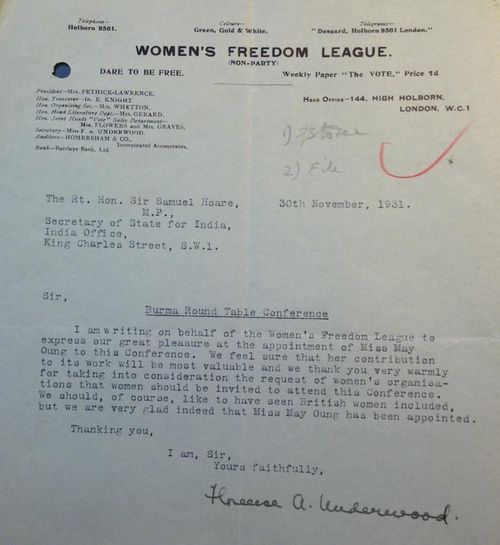 Posted by Margaret.Makepeace at 09:00:00 in Politics , Reform