Princess Amelia, the youngest child of King George III and Queen Charlotte, was born on 7 August 1783.  Amelia was delicate from an early age and later suffered from tuberculosis. She was her father’s favourite daughter, interested in art, music, history and literature as well as being an accomplished horsewoman. 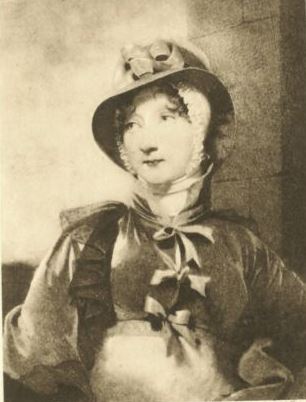 Amelia and her sisters were kept at home in the ‘Nunnery’ as their mother feared that the King’s mental health would be affected by difficult decisions about suitable marriages for his daughters.   The Princesses’ public outings were reported in the press and their costumes described in great detail – today’s preoccupation with the lives and appearance of members of the royal family is nothing new!  When the King, Queen and Princesses attended a performance at Covent Garden Theatre in May 1805, followers of fashion were treated to this pen portrait:

Closeting in the ‘Nunnery’ did not prevent the princesses from conducting clandestine romances with men connected to the court. When Princess Amelia stayed at Weymouth in 1801, hoping that the sea-bathing would improve her health, she fell in love with Colonel Charles FitzRoy, one of the King’s equerries.  She set her heart on marrying him, and began to use the initials A. F. R. – Amelia FitzRoy. 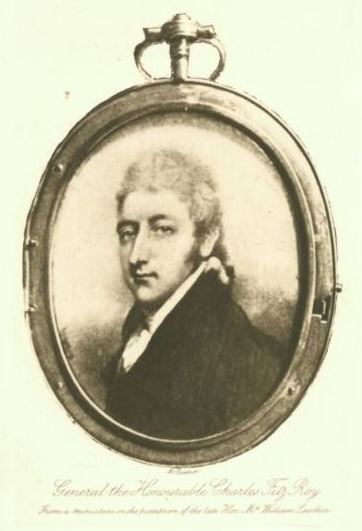 Charles Fitz-Roy from a miniature in the possession of the Hon Mrs William Lowther reproduced in W S Childe-Pemberton, The romance of Princess Amelia

By October 1809 newspaper articles about Amelia’s visits to Weymouth had an ominous tone: ‘The Princess Amelia takes the benefit of the warm salt bath, and as often as the weather permits, alternately takes an airing on the sand and an excursion on the water.  The benign effects of which, we fervently pray, will ultimately restore her Royal Highness’s health and spirits’.

Unfortunately the Princess’s health continued to deteriorate and she died at Windsor on 2 November 1810, much mourned.   On her death bed, Princess Amelia gave her father a ring which contained a lock of her hair and the inscription ‘Remember me’.   She left a will bequeathing the bulk of her estate to Charles FitzRoy and entrusting him with the handling of certain bequests.  Amelia’s executors, the Prince of Wales and the Duke of Cambridge, wished to avoid making public the relationship between their sister and FitzRoy.  They therefore secured FitzRoy’s agreement to cede his rights as residuary legatee, promising that Amelia’s wishes would nevertheless be honoured.  This pledge was not kept: FitzRoy was excluded from decisions about the distribution of Amelia’s effects and received very little from her estate.