You can’t keep a good man down!

In July 1947 the India Independence Act decreed that the dominions of India and Pakistan would be created on 15 August 1947.  British officers of the Indian Army faced the termination of  their careers and had to consider their future as civilians.  The Journal of the United Service Institution of India published an article by ‘G.B.S.’ entitled ‘You can’t keep a good man down!’ offering practical advice to this group of men.

From listening to casual conversations, ‘G.B.S.’ believed many officers were taking a pessimistic view of their chance in civil life. Official advice was well-intentioned but unhelpful as it tended mainly to suggest jobs which retired soldiers would probably not get. 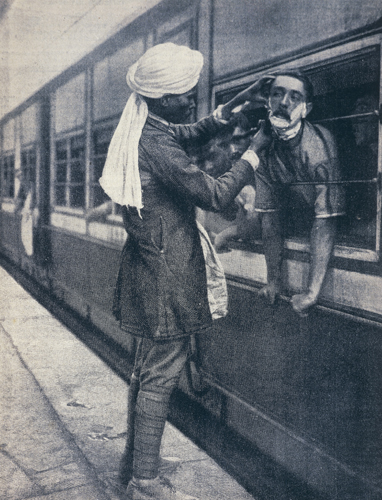 Army officer being shaved during a train stop to the Himalayas, from Journal des Voyages (1908). ©De Agostini/The British Library Board

Determination was said to be the key to success.  Retiring officers should calculate their liabilities and assets.  On the minus side was their concentration on soldiering and the need to learn a completely new trade.  But there were several things on the plus side.  Officers would have some capital and a pension.  The majority would be aged between 30 and 45 and so would have a reasonable expectation of 20-35 years of active life ahead of them.  They would have a good knowledge of men and the world.

Individual officers might have additional assets: language qualifications, private capital, or a particular skill or interest.  One ex-Indian Army officer who was an expert on insects had secured a job with an organisation studying crop pests, whilst another interested in philately owned a stamp shop in Piccadilly.

‘G.B.S.’ advised his readers to tap into the ‘Old Boy Network’ and not be ashamed to use every contact they had.  It took time to find a job even in a big city like London.  He suggested that officers should go to live in London for at least three months, but preferably six, making and following up contacts six days a week.   They should press on with acquiring qualifications if necessary, funding this by using some of their compensation money.

Many officers dreamed of owning a farm.   ‘G.B.S.’ warned that this was a technical profession requiring qualifications and capital of at £10,000 in addition to the Army pension.  Those attracted to life in the colonies or dominions should realise that the problems of getting a job there was no different.

The article ended by concluding that officers who had had reasonable careers ahead of them in the Indian Army could and would secure good jobs at home if they set about it in the right way and did not ‘take too great counsel’ of their fears. ‘Let us, therefore, go home with the thought in our minds (though we won’t broadcast this to our prospective employers) that the problem is not “Will I get a job?” but “Which job shall I do?”’.