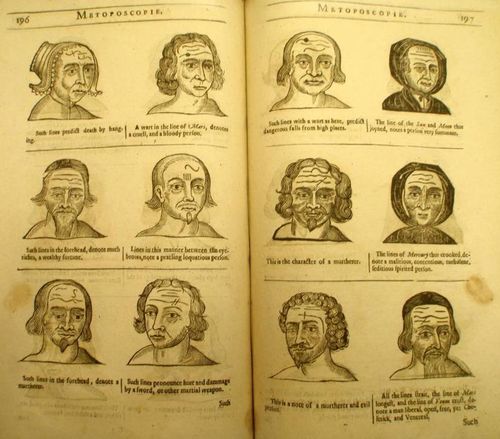 Metoposcopy was the science of reading character and foretelling a person’s future from the lines on the forehead. Like astrology, the practice was grounded in the belief that man, the earth, and the heavens were intricately connected, and that correspondences between the three lay waiting to be uncovered. According to this system of belief, the conjunction of the planets influenced men’s dispositions and fates, and a person’s appearance gave clues to character. In his book, Sanders maps the seven known planets onto seven lines. Facial marks take on meaning: ‘A wart in the line of Mars denotes a cruel and bloody person’.  Other, non-planetary lines show a plainer correspondence: a broken line for a wound from a sword; wavy lines for death by drowning.

Although new scientific discoveries gradually weakened the belief in correspondences, the idea that the face proclaimed the man remained a popular one. In 1697 the diarist John Evelyn wrote in praise of physiognomy, using as example one of the most famous faces of the century: ‘Let him that would Write and Read the History of the late Times, particularly that of the late Usurper Cromwell, but seriously contemplate the Falls, and Lines of his ambiguous and double Face…to read in it, without other comment, Characters of the greatest Dissimulation, Boldness, Cruelty, Ambition in every touch and stroak’.

Sanders’s Physiognomie also includes chapters on plants, parts of the body, and bodily marks. Below is the key to a discussion on moles. Readers with facial moles -- black, red, or honey-coloured – might wish to consult the book to find out more. 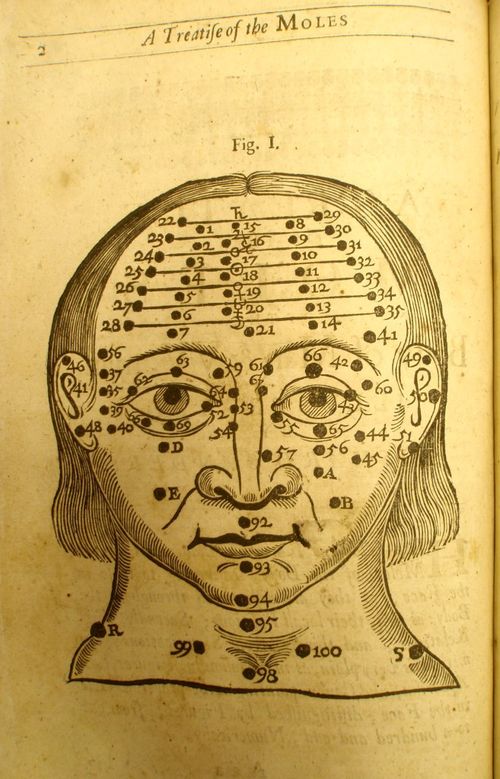 Posted by Margaret.Makepeace at 09:00:00 in Health , Science , Science and environment