On 26 September 1914, 28,500 Indian Army troops arrived on the Western Front to fill the huge losses suffered by the British Expeditionary Force. They arrived in the nick of time and played a vital part in the campaign.  Today we share letters written by Indian soldiers exactly one year later. 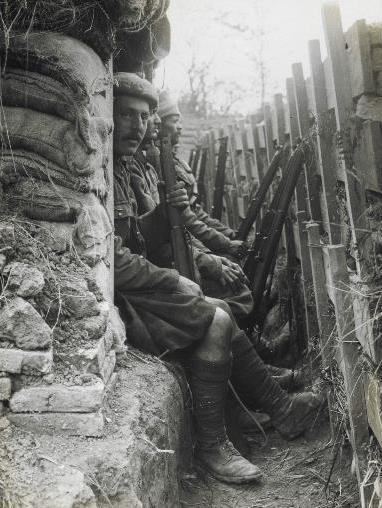 Untold Lives has previously featured extracts of letters from Indian soldiers fighting in France during the First World War. A common topic of their letters was news from the other theatres of conflict in the war, and requests for information from family and friends in India.

On 26 September 1915, Alladitta and Mustafa, Gunners with the Meerut Divisional train, No.7, wrote to Nathu Khan, stationed at Jhelum in India, giving news of the war: “As to what you wrote asking who has won the victory in Africa, the fact is that the English are fighting in Africa, and here too, and everywhere against the German Emperor. The Sultan of Turkey, who is the sovereign of the Musalmans, is helping the German Emperor, and is fighting the English steadily. He is fighting the English Army in the neighbourhood of the city Basra. As to what you say that there is no fighting going on in France, whoever told you so is lying. The fighting is going on with great vigour and thousands of mothers’ sons perish daily. There does not seem to be any arrangement to bring the war to a decisive issue. The matter is in the hands of God”. 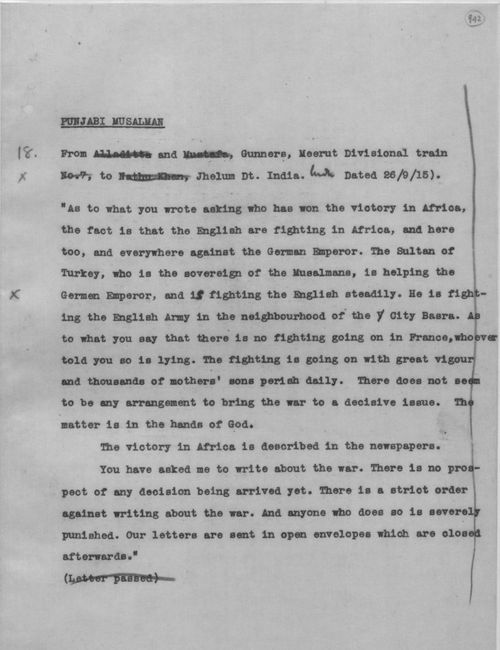 “The victory in Africa is described in the newspapers. You have asked me to write about the war. There is no prospect of any decision being arrived yet. There is a strict order against writing about the war. And anyone who does so is severely punished. Our letters are sent in open envelopes which are closed afterwards.”

As this extract shows, the Indian soldiers were well aware that their letters were being censored and some attempted to get around this with codes. On the same day Alladitta and Mustafa were writing to their friend in Jhelum, Mela Singh of the 25th Cavalry wrote from Marseilles to Magar Singh in the Punjab: “We are still in Marseilles. The news of the war is thoroughly bad. Below I write the signs which will give you the news when we go forward (to the front). For our letters are examined.

He also gives various symbols for being ill, a bullet and dead! 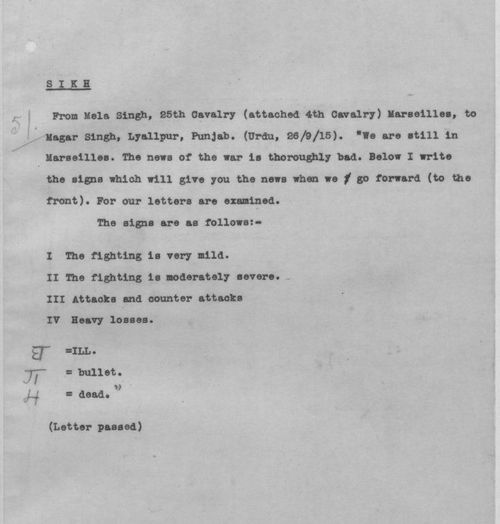 It was not the intention of the British Government to hide the fact that the soldiers’ letters were read; it was after all standard military practice. Both these letters were passed by the censor.

Just to clarify, the Hindi option ghāyal means wounded rather than ill, whereas the Punjabi option bimār means ill. I think it's more likely to stand for bimār which is why I suspect the letters are Punjabi rather than Hindi- that and the lack of a line above the letter for dead which corresponds to the Punjabi ਮ instead of the Hindi म

What an interesting post! One thing I noticed is that in the last image (IOR/L/MIL/5/825/6, f. 960) the 'symbols' you describe are actually letters from either the Devanagari alphabet used for Hindi or the Gurmukhi alphabet used for Punjabi. Rather than using symbols, Mela Singh is cleverly using shorthand or abbreviations to write home to Lyallpur, Punjab (now Faisalabad in Pakistani Punjab). I had initially thought it was Hindi because of how the letters have been transcribed and some similarities, but now suspect it might be Punjabi. I'll list both the possibilities here, with Punjabi letters first and Hindi letters second. He uses either ਬ (b) or घ (gh) for sick, presumably for either bīmār or ghāyal; ਗ or ग (g) for bullet, which I imagine stands for gōlī, and ਮ or म (m) for dead which most likely stands for marē or mrat.

I'd add that the transcript describes him as a Sikh writing in Urdu, from which the letter was presumably translated by the censors, but those letters are not part of the Urdu alphabet (a Perso-Arabic script although it too can be written in Devanagari). He clearly wrote the large part of it in Urdu with coded messages in Punjabi, demonstrating perhaps some fluidity of identity as a result of the tremendous diversity in pre-Partition Punjab. The writer (or scribe, as Mela Singh may have been illiterate like most soldiers) was clearly bilingual at any rate. Hindi and Urdu were the official languages at the time.

Fascinating how he used the vernacular (his mother tongue?) to subvert the censors at the time, leaving some aspects of his letters home indecipherable to the English 100 years later! It would be nice to know more about how widespread such practices were- WWI is not my research area and I don't speak Punjabi so I apologise for any lack of accuracy or mistakes here.