Librarians dying at the Battle of Loos

The Battle of Loos in north-eastern France in September and October 1915 was an attack by six British divisions as part of ’The Big Push’ by the Allied forces.  Before the infantry was given orders to advance on the morning of 25 September 1915, chlorine gas was released.  This was the first time the British Army had used poison gas in the War. On the first day of the attack 8,500 British soldiers were killed but only 2,000 have a known grave, such was the ferocity of the fighting. 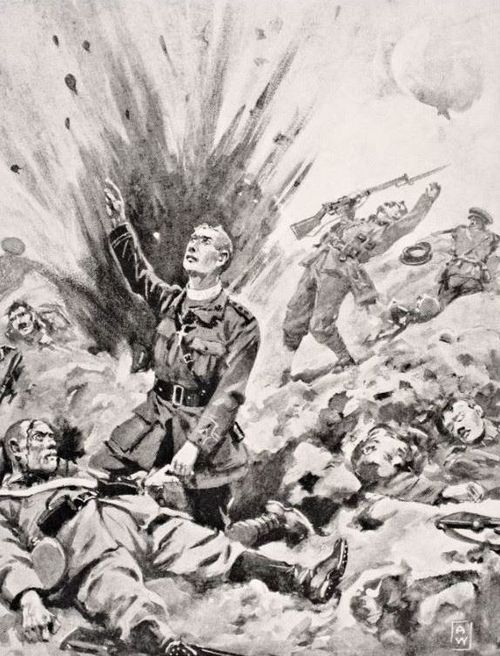 Reverend John Gwynn, chaplain to the Irish Guards, giving the last sacrament to a dying German soldier just before he himself was killed on Hill 70 at the Battle of Loos, October 1915 from The War Illustrated Album deLuxe (London, 1916)  © UIG/The British Library Board Images Online

On the 100th anniversary of the start of the battle we remember two British librarians who died at Loos.

Harold Percival Bevis was born in Paddington in 1891, the son of insurance agent Charles Thomas Bevis and his wife Emily Adelaide.  At the time of the 1911 census, Bevis was living in Willesden with his parents and two of his four siblings, and working as an assistant librarian at Hampstead Library. He enlisted in the Army on 23 September 1914 as a private in the 19th (County of London) Battalion, The London Regiment (St Pancras). The Battalion was a Territorial unit with its headquarters in Camden Town.

Just over a year later, 24 year-old Harold Bevis died on the first day of the Battle of Loos from wounds received in action – a gunshot wound to his shoulder and shrapnel in his right side. He is buried in Noeux-les-Mines Cemetery. The possessions listed in his record of service are a wrist watch, a rosary, an identity disc, and a strap.

Reginald Thomas Mayrick was born in 1895, also in Paddington.  He was one of seven children born to John and Florence Mayrick.  His father worked as a hall porter in a club.  When Florence completed the form for the 1911 census she recorded her 16 year-old son’s name as just Thomas, so perhaps this is how he was known within his family. Soon afterwards Mayrick left Wandsworth School and joined West Hill Public Library as a temporary assistant librarian on a salary of 7s per week.

Mayrick enlisted at Kingston-on-Thames as a private in the 9th Battalion East Surrey Regiment.  He fought at the Battle of Loos and died aged just 20 on 26 September 1915. His name appears on the Loos Memorial which commemorates over 20,000 officers and men who have no known grave.

The names of Harold Percival Bevis and Reginald Thomas Meyrick are inscribed on the memorial at the British Library which honours librarians who lost their lives during the First World War.

Posted by Margaret.Makepeace at 08:30:00 in World War One