Today is the 306th birthday of Samuel Johnson, compiler of A Dictionary of the English Language and poet and moralist. Johnson was born on 7 September 1709, but after the calendar was adjusted in 1752 he celebrated his birthday on 18 September. Actually 'celebrated' is too strong a word, because Johnson didn't like to be reminded of the passing years.  When his friend James Boswell reminded him of his impending birthday in 1773, Johnson wrote:

The return of my birthday, if I remember it, fills me with thoughts which it seems to be the general care of humanity to escape. I can now look back upon threescore and four years, in which little has been done, and little has been enjoyed, a life diversified by misery, spent part in the sluggishness of penury, and part under the violence of pain, in gloomy discontent, or importunate distress.

Despite his gloomy thoughts, it was not the case that Johnson had achieved little. He had devoted nine years of his life to his dictionary; it was a brilliant achievement, and before it went to press his friends wanted his academic qualities to be recognised.  As a young man, Johnson had been to Pembroke College, Oxford, but he had not completed his studies and left without a degree.  His friends therefore approached the University of Oxford to seek a Master of Arts for Johnson. The university conferred the MA on Johnson in 1755 in recognition of his work on the dictionary. This was just in time for the letters ‘A.M’ to be added to the title page. 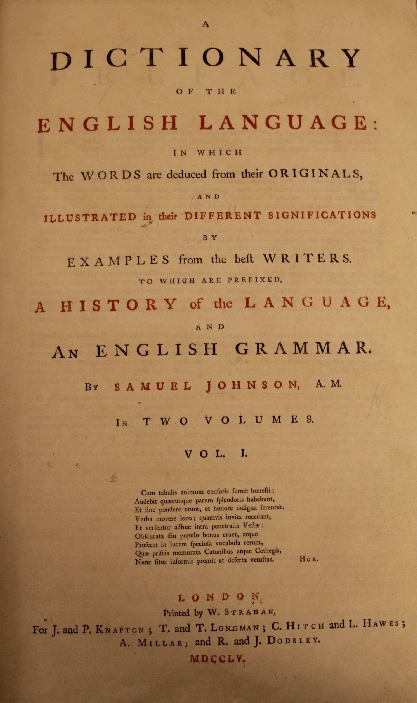 The university went on to confer a doctorate on Johnson in 1775, which pleased him greatly.

Johnson’s MA diploma is now preserved in the British Library.  After his death it was owned by his friend and biographer James Boswell, and it came to the Library in 1910. 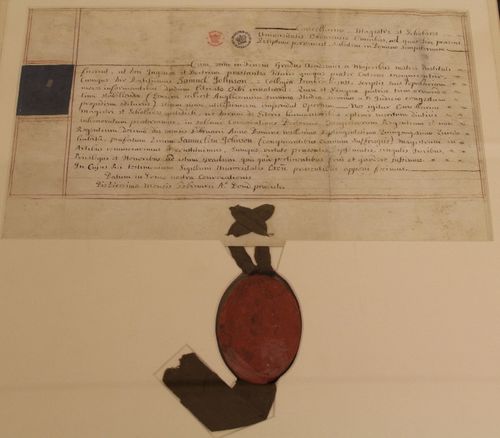