As the school summer holidays draw to a close, we bring you a story about a hotel where all the guests were children.

The Peter Rabbit Hotel in St Anne’s-on Sea Lancashire placed newspaper advertisements in 1951 describing itself as a small first-class hotel for children only.  The daily rates were 1½ guineas for babies and 1 guinea for children over 2 years.  Fees increased at Christmas to 2½ and 2 guineas respectively. Permanent residence cost £260 per annum.  An article headlined ‘Storybook hotel has seesaw in the lounge’ appeared in the Yorkshire Evening Post on 14 May 1951.  The author was a young Keith Waterhouse, who started his career as a junior reporter in Leeds. 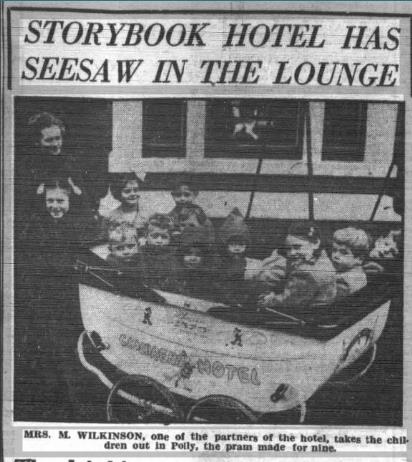 The hotel was the brainchild of Mary Hamilton, a nurse, and Mary Wilkinson, a teacher, who had found it difficult to find care for their children during working hours. Their daughters became the first residents at the Peter Rabbit Hotel.

Waterhouse noted that there were highchairs in the dining room, orange juice instead of gin and tonic, a nine-seater pram rather than a hotel bus, and a matron in place of a maître d’hotel. Children could stay for an hour or for a year, with a maximum of fifteen guests at a time. Girls between two weeks and twelve years were accepted, but the upper age limit for boys was seven years, ‘boys being more of a handful for the staff of two nurserymaids and two domestics’.

Each room was filled with toys and equipped with a toy telephone. The rooms were decorated and named after characters in Beatrix Potter books: Peter Rabbit, Benjamin Bunny, Mrs Tiggy-Winkle, Jemima Puddle-Duck, and the Flopsy Bunnies. Waterhouse wondered if there was a Fierce Bad Rabbit room for wayward guests, but Mrs Hamilton assured him that she could manage without this. Pollyanna, the specially-built nine-seater pram, was used to transport children back and forth to the hotel’s private beach, and was photographed at Euston Station London full of young guests bound for St Anne’s.

In early 1952 newspapers show a change of name to the Teddy Bear Hotel – a rights issue perhaps?  Advertisements for the newly-branded hotel continued until 1953 and then seem to stop.  Can any of our readers tell us what happened to Mrs Hamilton, Mrs Wilkinson, and Pollyanna?

Posted by Margaret.Makepeace at 09:00:00 in Domestic life , Work