An anthology of decorated papers

Many hidden narratives are wrapped up within the British Library’s collections of decorated papers.  Some are addressed in Thames & Hudson’s new book published in association with the British Library, An Anthology of Decorated Papers.

Making block printed papers was potentially fatal for workshop owner Jean-Baptist Réveillon (1725-1811) when the mob stormed his prosperous factory, one of the first incidents in the French Revolution.  His life was saved but his business was lost, taken over by others who concentrated on the production of patriotic red, white and blue printed papers!

In 18th century Germany youngsters, including the writer Goethe, collected brocade papers gold embossed with scenes from stories, trade, the New Testament and exotic animals (sometimes spending as much as a penny!).  A pattern in the Goethehaus in Frankfurt am Main depicts scenes found on Hirsch J303.  Less fortunate children had to help in the manufacture of decorated papers either in family workshops or large factories. 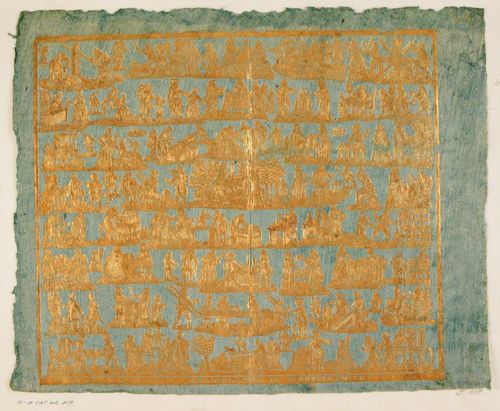 Decorative paper wrappers were found in the possession of those with high status and low, from Queen Charlotte of England’s music manuscript book to the more modest  History of birds (price six pence).

This type of paper (J315) also celebrated topical events, including the building of the railway from Nuremberg to Fürth on 7 December 1835. 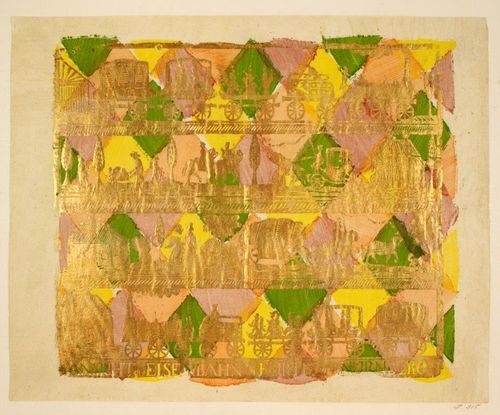 Magic powers imbued some Japanese block-printed sheets which were affixed to doors to ward off earthquakes and other natural disasters.

Benjamin Franklin believed marbling would add an extra level of security in the printing of money and sourced the paper used for the production of three pence notes by his grandson.  The system was not without flaw.  In England the forger William Chaloner produced his own marbled £100 notes.  Isaac Newton, Master of the Royal Mint, kept a close eye on Chaloner’s scams and the counterfeiter was hanged in 1699.

There are as many stories as papers!

Posted by Margaret.Makepeace at 11:59:00 in Arts and crafts

Posted by Margaret.Makepeace at 11:59 AM