Captain James Cook was born in the village of Marton in the North Riding of Yorkshire on 27 October 1728. He began his career at sea working in the North Sea coal trade, but in 1755 he enlisted in the Royal Navy. During the Seven Years War he served as the Master on the Pembroke, discovering and developing his talent for surveying. 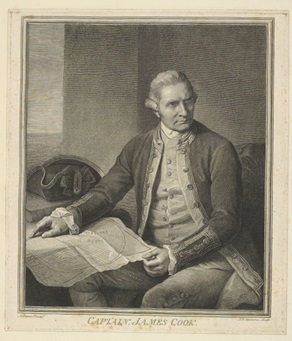 The chart below was created by Cook in 1763. It shows the Islands of St Pierre and Miquelon just off the South Coast of Newfoundland. 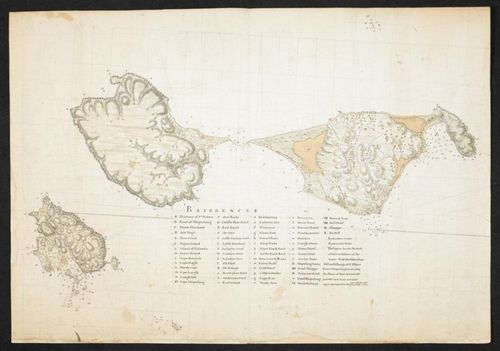 In 1767 Cook was appointed to command the Endeavour on a voyage commissioned by the Royal Society to observe the Transit of Venus from the island of Tahiti. On board were astronomer Charles Green and the wealthy naturalist Joseph Banks whose retinue included the artists Alexander Buchan and Sidney Parkinson (who both died on the voyage) and the naturalist Daniel Solander.

Sailing from Plymouth on 25 August 1768, Cook reached Tahiti on 13 April 1769. After successfully observing the Transit of Venus, Cook opened his secret instructions from the Admiralty which ordered him to search for the Great Southern Continent.  Having failed to find the continent Cook decided to investigate the land sighted by Abel Tasman in 1642, which Dutch cartographers had named New Zealand. The chart below was drawn by Cook and is accurate except for two mistakes: he charted Banks Peninsula as an island, and he charted Stewart Island as a Peninsula. 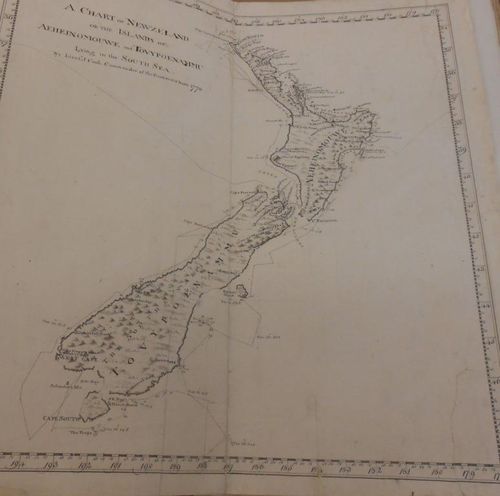 Cook carried onto the Eastern Coast of Australia, the first sighting by Europeans. After carrying out a running survey of the East Coast, Cook returned to England. The voyage was received by the British public as a great success. However Cook had not given up on the idea of finding a Great Southern Continent and proposed a second voyage circumnavigating the globe from west to east as far south as possible.

Captain Cook sailed in the Resolution in company with Tobias Furneaux in the Adventure. Whilst attempting to locate the fabled Southern continent Cook and his officers accurately charted the islands in the Pacific they came across including Vanuatu as shown below. This chart is attributed to Midshipman John Elliott. 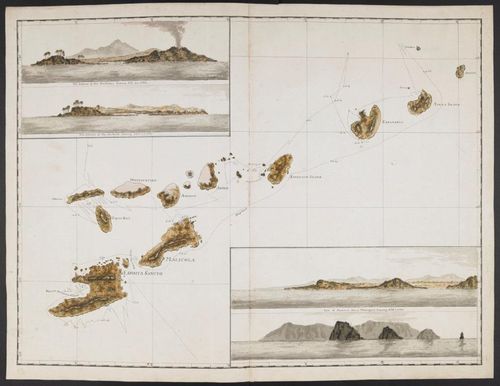 Cook was appointed to the Resolution again early in 1776 to locate the North West passage, accompanied by Captain Charles Clerke in the Discovery.  Having failed to discover the passage, Cook was forced to return to the Hawaiian Islands with a damaged ship. Relations with the local people were hostile and took a turn for the worse when the one of the Discovery’s cutters was stolen and Cook planned to take an Hawaiian Chief hostage. When he went ashore on 14 February 1779 he was met by a volatile crowd. In the ensuing altercation Cook and four of the marines were killed.

The British Library holds a world renowned collection of the charts, artwork (ethnographic and landscapes) and logbooks from Cook's three voyages. We are pleased to announce that we are curating an exhibition based on these collections which will be held in summer 2018.

Further reading:
More information on James Cook can be found at: Andrew C.F. David, 'James Cook', Oxford Dictionary of National Biography
An account of the second voyage by John Elliott is held at the British Library Add MS 42714 ff.7-45.