Kafka’s Tanks: an early US attempt to enter the Gulf arms market

Collectively, the member states of the Gulf Cooperation Council now form one of the largest and most lucrative markets in the world for the global arms industry.

However, eighty years ago, in 1934, the situation was dramatically different.  For example, Kuwait did not possess a formal military force at all at that time and the oil deposits which have since given the country enormous wealth had not been discovered, let alone exploited. Politically meanwhile, the British Empire was still very much in the ascendancy in the Persian Gulf. The US, in common with all other foreign powers, was barred by Britain from establishing any formal diplomatic presence or representation in Kuwait. Nevertheless, files in the India Office Records held at the British Library, reveal that even then – in a pre-cursor to the US’ later hegemonic position –American arms companies had begun to target Kuwait as a potential market for the sale of their goods. 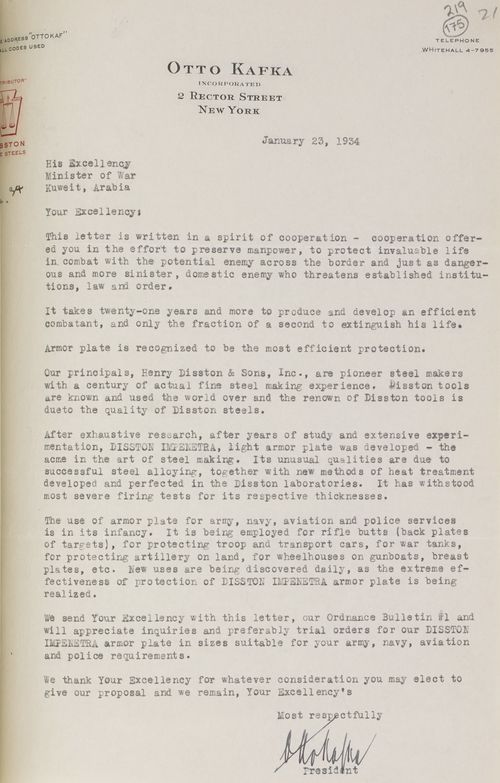 Kafka’s first letter - IOR/R/15/1/505, f 175.  The copyright status is unknown. Please contact copyright@bl.uk with any information you have regarding this item.

In January 1934, Otto Kafka, President of Otto Kafka Incorporated, New York wrote two letters addressed to the Minister of War in Kuwait. Since Kuwait did not actually have a Minister of War (or equivalent), the letters were instead delivered to its ruler, Shaikh Ahmad Al Jaber Al Sabah.

The first letter – written in “a spirit of cooperation” – extolls the virtues of ‘Disston Impenetra’ steel and underlines the role it can play in protecting “invaluable life in combat” not only with the “potential enemy across the border” but also the “just as dangerous and more sinister, domestic enemy who threatens established institutions, law and order”. The letter remarks that “[i]t takes twenty-one years and more to produce and develop an efficient combatant and only the fraction of a second to extinguish his life”.

In the second letter, Kafka describes in detail the specifications of the Disston Six Ton Tractor-Tank; “a combination of war and peace machine” that had reportedly “created a sensation in military and police circles”. Kafka stresses the tank’s small size and suitability for use in city streets and “difficult war terrain”. 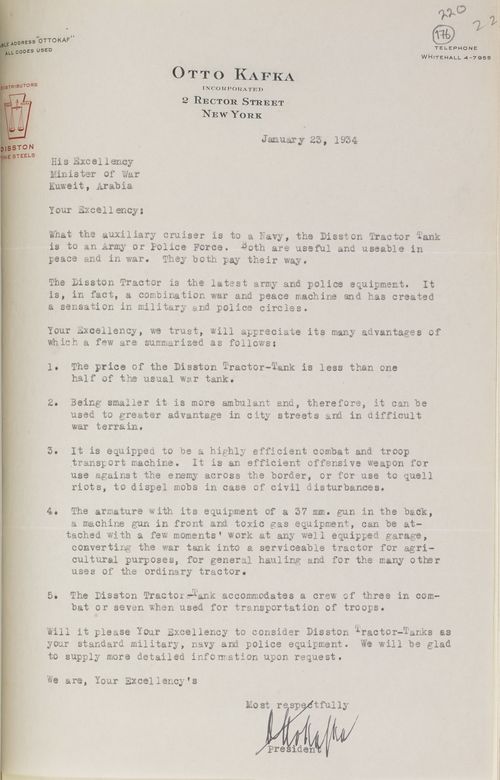 Kafka’s second letter - IOR/R/15/1/505, f 176. The copyright status is unknown. Please contact copyright@bl.uk with any information you have regarding this item.

Accompanying Kafka’s letters was a glossy promotional pamphlet in which it is  proudly stated that the ‘tractor-tank’ possesses chemical warfare capabilities and could be be equipped ‘with a giant military candle filled with smoke, tear or vomiting gas’. Notwithstanding Kafka’s polished sales pitch it appears that his attempt to interest Kuwait in his company’s products failed and no purchases were made. 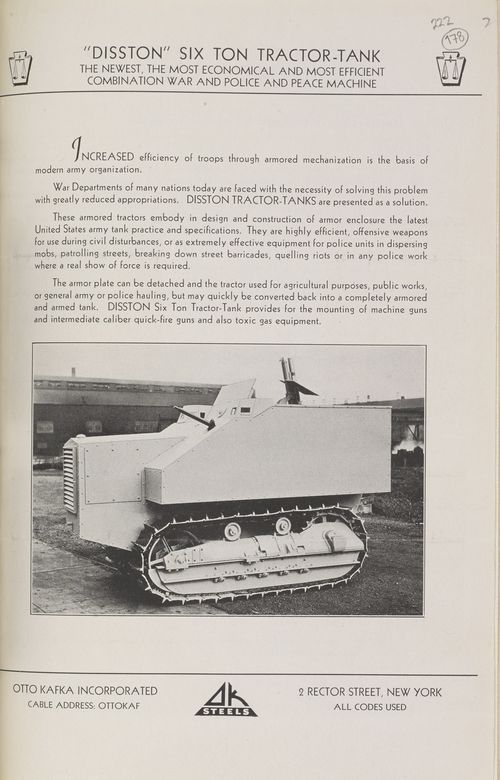 The “Disston Six Ton Tractor-Tank” – IOR/R/15/1/505, f 178. The copyright status is unknown. Please contact copyright@bl.uk with any information you have regarding this item.

When reporting the incident to his seniors, Harold Dickson, the British Political Agent in Kuwait, remarked sardonically that Otto Kafka’s attempt was “not a very edifying procedure when their Government (the U.S.A) is supposed to be taking the leading part in the world today to try and stop war etc”. 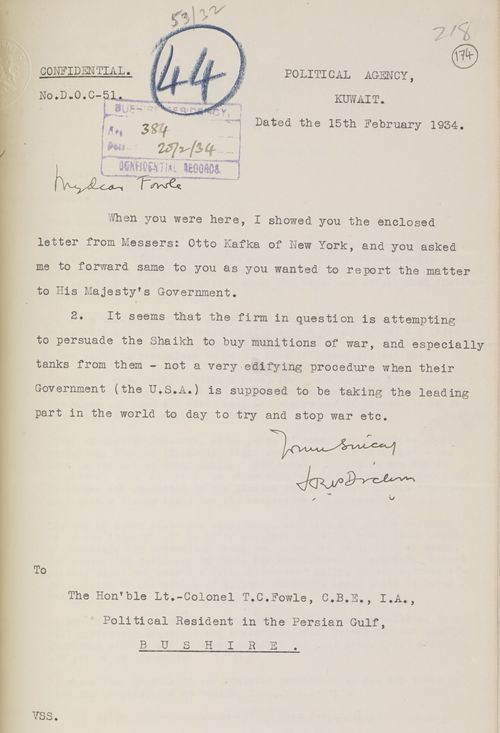 Posted by Margaret.Makepeace at 08:30:00 in Commerce , Politics , Qatar