Cats put in their first appearance early on in Animal Tales (our Entrance Hall exhibition running until 1 November 2015) in the shape of a wonderful doodle of a cat drawn by Pieter van Veen in the margin of his copy of the 1602 edition of Montaigne’s Essais. 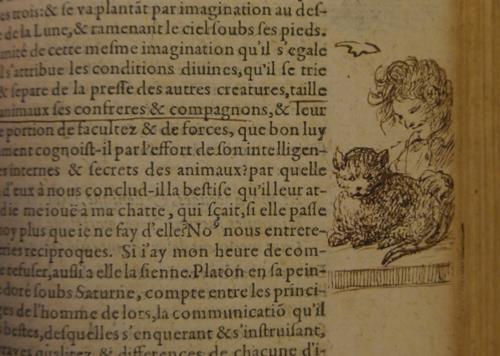 Marginal picture of a man with a cat, drawn by Pieter van Veen in his copy of Montaigne’s Essais (Paris, 1602) British Library C.28.g.7.

Then we have Nicola Bayley’s glowing double-spread illustration in Antonia Barber’s re-working of a Cornish tale, The Mousehole Cat, with the tiny image of Mowzer tossed about in a boat in the grip of the Great Storm-Cat, before we reach T.S. Eliot’s cats and SF Said’s Varjak Paw. I first heard about Varjak – rather than read about him – around seven years ago, listening in my car to a cassette borrowed from my local library. Varjak, a Mesopotamian Blue, has to leave the safety and comfort of his home, and find a dog (yes, a dog) to help his family. Said’s novel celebrates friendship and loyalty and, perhaps most of all, the willingness to be open to everyone and every experience. Beyond that, of course, it is a cracking story – with pace, action, adventure and tension, as Varjak bravely ventures forth and finds new friends and self-reliance - and the book itself is enhanced by Dave McKean’s striking illustrations. As for T.S. Eliot and cats, there are three ways to encounter them in the exhibition – we are showing the opening of “The Song of the Jellicles” from the edition of Old Possum’s Book of Practical Cats illustrated by Nicolas Bentley in 1940 together with a letter Eliot wrote describing the way cats attach themselves to you and you can listen to him reading about Macavity on one of the sound points.

More menacing cats appear in an issue of Funny Aminals from 1972, the first appearance of Art Spiegelman’s portrayal of his parents’ experience of the Holocaust, and finally we include William Burroughs’ The Cat Inside (1986) – a melding of memory and story about cats.

Then there are all the ‘big cats’ – lions, tigers, leopards - but what of the cats that got away, the ones we couldn’t include?

You will all have your own favourites – but here are some of mine from children’s literature. First, Carbonel by Barbara Sleigh, originally published in 1955 and known to me in the late 1960s. Carbonel, a cat with a fine, disdainful, turn of phrase, is a usurped prince who meets his match, and his emancipator, in the person of Rosemary, whose wealth of imagination and tenacity make up for her lack of material riches. More recently, I have pored (should that be purred?) repeatedly with small children over the board-book publications featuring Judith Kerr’s Mog and we have enjoyed the antics of Six Dinner Sid by Inga Moore (the clue is in the title…).

Then, of course, there are Kathleen Hale’s Orlando, the Marmalade Cat, who first appeared in 1938, but continued to entertain throughout the Second World War and beyond, and Gobbolino the Witch’s Cat by Ursula Moray Williams, first published in 1942, both of whom I only encountered as an adult. The list seems endless – but what have I missed?

Posted by Margaret.Makepeace at 08:30:00 in Literature