On 17 October 1814 catastrophe struck at Meux’s Brewery on Tottenham Court Road London.  Eight people lost their lives when a vat full of beer burst, releasing 3,555 barrels of liquid.  The shock demolished the brick wall of the brew-house which was 25 feet high and 22 inches deep and caused a substantial part of the roof to fall in.  The cock of the adjoining vat was broken and the contents poured out, adding to the flood of beer. 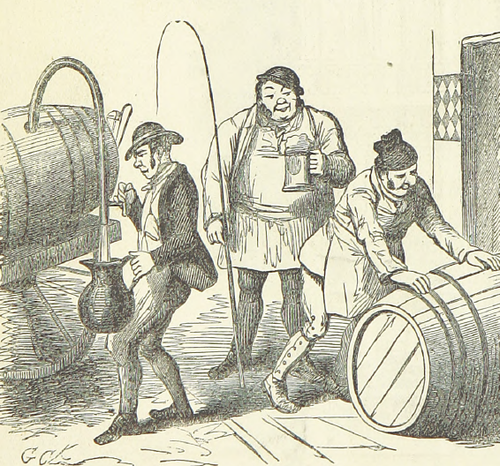 Richard Hawes gave evidence at the coroner’s inquest held on Wednesday 19 October that he was in the tap room of the Tavistock Arms at 5.30pm on the previous Monday when he heard a crash. The back part of his house was beaten in and everything in his cellar destroyed. Beer was pouring into his pub and across the street.  Eleanor Cooper was in the yard washing pots and her body was dug out from the ruins nearly three hours later. She was found standing by the water butt.

One little girl lost her mother, brother and grandmother in the accident.  They were buried and suffocated in the kitchen of a house in New Street adjacent to the brew-house. She escaped because she had just been given permission to go out to play in the street.

Others suffered serious injuries: the brewery superintendent and one of the labourers were taken to Middlesex Hospital and were reported to be ‘in a dangerous way’. The coroner’s jury returned a verdict that the victims had met with their deaths ‘casually, accidentally, and by misfortune’.