Theatreland Raid by the ‘Baby-Killers’

On this day 100 years ago the German Navy authorised a bombing raid on London using five Zeppelins. This was not the first raid which had been carried out against Great Britain. The first bombs fell on the night of the 19-20 January 1915 over Great Yarmouth, Sheringham and King’s Lynn. The first raid on London occurred on 31 May 1915. The Zeppelins gained the name ‘Baby-killers’ after the death of three year old Elsie Leggett in her home in Stoke Newington.

It was during the First World War that Germany became the first nation to conduct aerial bombings against Great Britain. These were carried out in airships, which were long cylindrical rigid structures filled with gas. The first type of airship constructed was called a Zeppelin after its inventor Count Ferdinand von Zeppelin and these were the main type of airship used during the First World War. 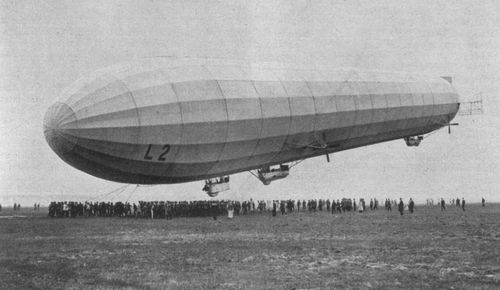 On 13 October 1915 the Zeppelins appeared over the Norfolk coast at 18:30 but only one made it to London. This Zeppelin known as L 15 proceeded to bomb the area around Charing Cross including the Lyceum Theatre. 17 people were killed in this attack and 20 injured. The other Zeppelins, which did not make it to London, bombed Woolwich, Guildford, Tonbridge, Croydon, Hertford and an army camp near Folkestone. A total of 71 people were killed and 128 injured.

The Zeppelin bombings in London were witnessed by many of its residents including the boys of Princeton Street Elementary School. In the aftermath of the bombing raid of 13 October and a previous raid on 8 September the boys recorded their experiences of the bombings in two volumes now held at the British Library. In the accounts most of the boys were getting ready for bed, running errands or playing out on the street when the Zeppelins arrived, which suggests that Londoners had no prior warning of the attacks. The boys expressed both excitement and fear at the sight of the air ships and most went out to inspect the damage once they had left.

R. Beasley records how he was on his way to collect a parcel from his father when he saw a bomb explode near the Lyceum Theatre. He recalls how the man next to him had his arm blown off before he ran into the Theatre to seek shelter. Beasley goes on to reveal how his father was one of the injured in the blast and was taken to Charing Cross Hospital. 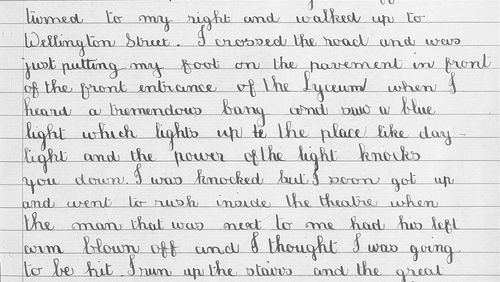 E. Brown was asleep when the bombs started falling but was woken up by ‘a reverberating roar, like lions’. He got up to see what was happening and went downstairs where he caught sight of the Zeppelin. On seeing the guns firing at the Zeppelin, Brown headed for a closer look. The following morning he was annoyed that the Zeppelins had caused him to lose ‘3 hours of my sleep’ as well as the damage to the local area and Beasley’s father.

The Zeppelin raids across Britain continued until 5 August 1918. During the course of the war British air defences improved and a number of Zeppelins were shot down. The photograph below shows the hull of L 33, which was damaged by an anti-aircraft shell and by night fighters. The Zeppelin was forced to land in Essex as the Captain judged that it would not have survived the flight across the North Sea. There were no fatalities. 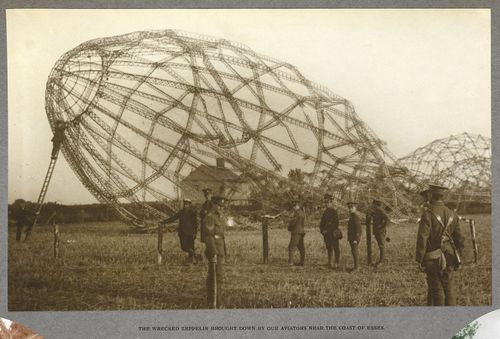 India Office Official Record of the Great War - 'The wrecked Zeppelin brought down by our aviators near the coast of Essex. The skeleton of an airship which crashed in a field. 1915'. Photo 21

Further reading:
More information on the Zeppelin raids. The full accounts by R. Beasley and E. Brown can be found on The Library’s Digitised Manuscripts website.

Posted by Margaret.Makepeace at 12:18:00 in Manuscripts , World War One