Trafalgar and the death of Nelson

Today, 21 October, marks the anniversary of the Battle of Trafalgar, fought by the Royal Navy in 1805 under the command of Viscount Horatio Nelson against a superior combined force of French and Spanish ships commanded by the French Admiral Villeneuve. It was the most decisive naval battle of the Napoleonic Wars, confirming British naval supremacy and ensuring that Napoleon was unable to progress his plans for an invasion of Britain.

In a letter written just before the battle Nelson informed his mistress Emma Hamilton:

'…the signal has been made that the enemy's combined fleet are coming out of Port. We have very little wind, so that I have no hopes of seeing them before tomorrow. May the God of Battles crown my endeavours with success; at all events, I will take care that my name shall ever be most dear to you and Horatia, both of whom I love as much as my own life. And as my last writing before the Battle will be to you, so I hope in God that I shall live to finish my letter after the Battle'.

This was the last letter Nelson would write Emma. 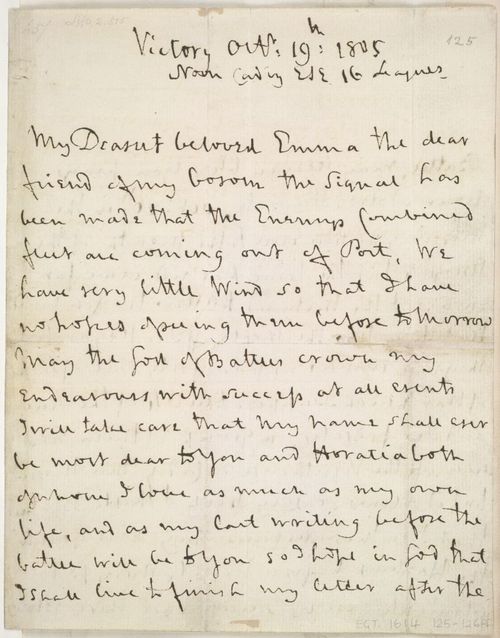 Just before the two sides engaged at about noon on 21 October, Nelson sent round his famous flag signal: ‘England expects that every man will do his duty’. By 5pm the battle was virtually over with the British having captured seventeen prizes and burned another. Admiral Villeneuve was taken prisoner and taken back to Britain. Only eleven French ships escaped back to Cádiz and of those only five were considered seaworthy.

So comprehensive was the victory that Nelson’s unorthodox tactics have given rise to a great deal of controversy ever since, with some praising them as a masterpiece of naval strategy while others question how much control he had over his unusual plans. Nelson’s chief aim was to send the enemy into confusion. Twelve days before the Battle of Trafalgar, Nelson sent this memorandum to Admiral Collingwood: the British fleet was to be drawn up ‘in two lines of 16 ships each with an advanced squadron’. The intention was to ‘overpower from two or three ships ahead of the Commander-in-Chief’. 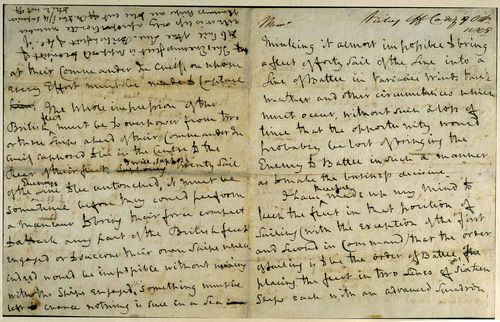 The victory at Trafalgar came at the cost of many lives including that of Nelson who was hit by a musket-ball fired from the mast of the French ship Redoubtable. In severe pain, he died three hours later at 4.30 pm. His body was preserved in a barrel of brandy for the voyage home.

Celebration of the great victory at Trafalgar was heavily tempered with grief at the news of Nelson’s death. On 9 January 1806 he was interred in the crypt of St Paul’s Cathedral.  Huge, silent crowds lined the streets to watch the cortège go past. Even the captured French Admiral, Villeneuve, was present to pay his respects. 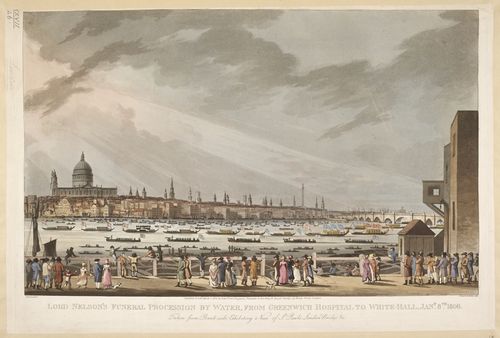 Nelson's influence continued long after his death with great revivals of interest, especially during times of national crisis in Britain. Though it came at the cost of his life, his comprehensive victory over the Franco-Spanish fleet at Trafalgar ensured his reputation as one of Britain’s greatest naval heroes for many centuries to come.

Posted by Margaret.Makepeace at 12:15 PM