'Even to Live is an Act of Courage'

The factory at Bandar Abbas, run by the East India Company to carry out trade in Persia and the Gulf region, was an unpleasant place to be at the best of times, described to be '…but an inch-deal from hell'.  Many of the men who went there would never leave, dying of a variety of diseases, or from the hostile intent of the locals, their own servants, or even each other.  While any of these methods are sad, both for the small community in the factory and their families, they do not bear the same sense of tragedy as the case of George Batterson.  Batterson was the Sergeant of the guard at the factory, essentially the second in command of the military presence there.

On the morning of 3 February 1746, between about 3 and 4 o’clock, a shot was heard by the watch.  After an alarm was sounded, the shot was found to have come from Batterson’s quarters, where he had shot and killed himself with his own pistol.  In the later entry concerning his death, it is noted that Batterson had sunk into “melancholy” since arriving at Bandar Abbas. 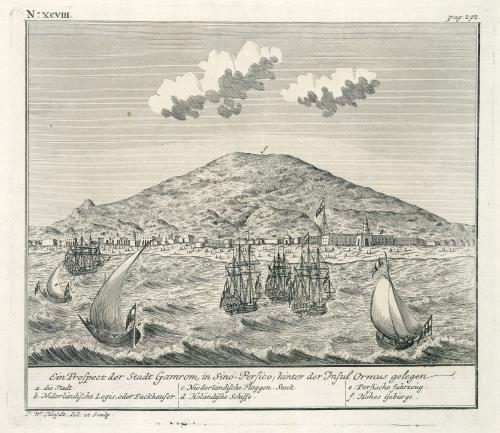 View of the city of Gamron by Johann Wolfgang Heydt c.1735 reproduced by Atlas of Mutual Heritage

This event highlights the excessive strain that must have accompanied life on the outer edge of the Company’s operations in Asia.  Sadly for Batterson, depression was not a recognisable condition to his colleagues, or to society at large, least of all on the hot, arid coast of the Persian Gulf.  Loneliness, illness and alienation cannot have been uncommon features of life in Bandar Abbas, or any of the Company’s other far-flung outposts, throwing a very human aspect into the discourse of the Company’s trade in Asia.  Trading came at a cost, not only in treasure, but in human lives.

Posted by Margaret.Makepeace at 10:59 AM