Flying over the liners: Passenger aviation across the Gulf during the 1930s

Every Sunday, Wednesday and Saturday, Sharjah aerodrome became a hive of activity a few hours before the incoming Karachi bound Handley Page 42 aircraft was due to land. The Aerodrome was a stop on the Imperial Airways route between Britain and Australia, the first air route of its kind which was established in December 1934.

The aerodrome ‘station’ supervisor would have had a very peripatetic role because he was responsible for ensuring that all ran smoothly, from organising the employees to the setting up of the fuel tanks through to the management of the passenger hotel. The Marquess of Londonderry commented that the installation was ‘a triumph over many difficulties’ while acknowledging that ‘there are no luxuries’. It is interesting to note the parallels which existed between airline and rail travel, starkly reflected in the interior detailing of the early planes, right down to overhead baggage racks. 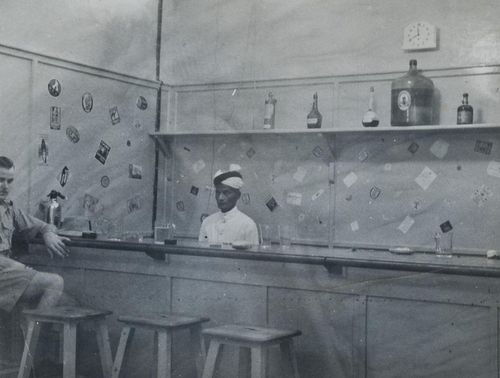 The bar at Sharjah Aerodrome courtesy of J.S.Adams (from Clive Adams Photo Archive)

The passengers rose from their Pullman seats and exited the plane where the desert air mixed with the sounds of the engines ticking to a stop. Guards waited outside the plane to escort them to the fort/ hotel attached to the aerodrome. Those guards were provided by the Sheikh as part of the rental agreement with Imperial Airways who rented the airstrip and fort for 1100 Rs every month to protect it from desert marauders.  Once inside, they were handed a slip of card emblazoned with the Imperial Airways logo with their room number and the time of departure, which would have been early morning at sunrise.

The courtyard of the fort was a veritable oasis in the desert, where the airline passenger would have been presented with the chance to play the same games found on the deck of those ships plying the route between Britain and Australia. Whilst the passengers waited for their luggage to be transported to their lodgings, their airliner was rolled into ‘a barbed wire enclosure into which aircraft can be brought in for protection’. After the night sky extinguished the sound of deck games in the courtyard, the ‘homely smells of Brown Windsor soup and roast mutton’ would have washed through the canteen and passengers were treated to ‘giant bowls of oysters, good wines and sickly sweet pastries’.

It was prudent to have an early night owing to the early morning departure and possibly all eighteen passengers would have taken it in turns to use the Sharjah Bath, which was the only one available between India and Iraq where ‘the Sharjah bath became an institution almost as celebrated as the Raffles Long Bar’. The aerodrome also boasted its own bar for the use of those passengers overnighting there.

In 2015 the original fort which once welcomed intrepid through travellers by air is now welcoming tourists who travel to glittering Sharjah as a destination in its own right. The original fort is the only surviving element from the 1947 map featured below.

Posted by Margaret.Makepeace at 09:00:00 in Journeys , Middle East , Qatar