Guy Fawkes Day is traditionally celebrated in the UK on 5 November to mark the failure of the Gunpowder Plot against King James and his Parliament in 1605.  It was officially a public holiday of thanksgiving from 1606 until 1859. Effigies of conspirator Guy Fawkes are burnt on bonfires and fireworks are launched into the night sky.

Gangs of boys in 19th century London would prepare long in advance for the festivities.  Fuel for bonfires was acquired stealthily: raids were made on poorly nailed fences, deserted buildings with wooden floorboards, loose doors.  These ‘burnables’ were secreted where other collectors would not find them.  Next a Guy had to be assembled – a straw man clothed in an old coat, breeches and stockings.  A wooden head could be made from a barber’s block with a face drawn on with chalk and charcoal, topped by a stiff paper cap painted and knotted with paper ribbon strips. A lantern was placed in one hand and a spread bunch of matches in the other.  The Guy was then tied to a chair and carried through the streets, its owners running up to passers-by with a hat for coins exclaiming ‘Pray remember Guy!’ or ‘Penny for the Guy!’. 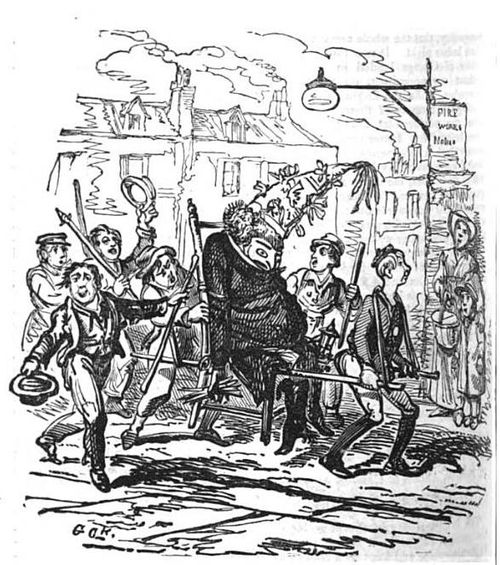 If two Guys met in the street, a scuffle often broke out as each group tried to capture their rival’s effigy.  A gang who hadn’t made a Guy might acquire one by attacking a weaker group, a mission known as ‘going to smug a Guy’.

Humans could also fall victim to smugging  for a Guy as London cobbler William Smith discovered to his cost in November 1852. Smith was ‘on the drink’ celebrating his birthday with several other cobblers.  After visiting at least 20 different pubs, he and his friends ended up at a house near Seven Dials.  There they met four Irishmen: James Byrne, Patrick Hay, Joseph Cullen, and Robert Hogan.  Smith treated the Irishmen to four or more pots of ‘heavy’.  When they complained that the beer lay cold on their stomachs and asked to be bought gin, Smith refused.  The cobblers adjourned to a nearby beer shop and continued drinking.  The Irishmen followed. Cullen told Smith that they would smug him for a Guy for not buying them gin.  Smith thought he was joking and took no notice.  However as he left to go home, the four men pounced on him.  They tied his hands behind his back and placed him in a truck.  They then blacked his face, knocked his hat over his eyes, pinned some firecrackers to his coat, and dragged him into More Street.  There a crowd of more than 100 people watched as they set fire to the crackers to Smith’s great alarm.  After that, Smith was wheeled to a mud heap and pitched into the middle.  The Irishmen were caught by the police as they ran away.  They were tried for assault and fined 20s each or, in default, to seven days’ imprisonment.

Posted by Margaret.Makepeace at 08:30:00 in Crime , Domestic life