The lonely death of a British Vice-Consul in Persia

On 4 June 1902 Captain Edward Boxer’s miserable five-month tenure as British Vice-Consul at the Persian port of Bandar Abbas, was brought to an end by an abrupt and fatal attack of bilious fever.

Boxer was the third Vice Consul to be sent to Bandar Abbas – a strategically important yet barren and inhospitable port – in the space of just two years. The first was invalided after less than a year. The second lasted just six months, but at least got away in one piece. What was it about Bandar Abbas that made a Government posting there such a disconsolate and precarious existence? 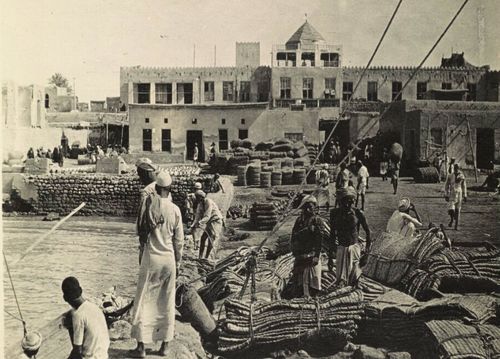 View towards the customs house at Bandar Abbas, 1917. From ‘Album of tour of the Persian Gulf. Photographer: Rev. Edwin Aubrey Storrs-Fox’ Shelfmark: Photo 496/6

A report on a visit to the Vice-Consulate at Bandar Abbas published in The Times of India on 1 April 1902 casts light on a sorry state of affairs. The anonymous reporter felt compelled by ‘pure patriotism’ to expose the British Government’s ‘incredible apathy’ towards a port widely regarded as of paramount strategic importance to British interests. He described a ‘half-finished building [with] not even a consular flagstaff’, in lieu of which, the Vice-Consul (Boxer) had contrived a ‘bamboo pole stuck in a baked mud base on the [building’s] roof’.

Conditions inside the Vice-Consulate were no better: ‘The consular office furniture consisted of an old desk, a tin box and three chairs. There was not even a stool for a clerk, who sits on the floor.’ The consulate’s records, the writer reported, had been looted while en route to Bandar Abbas and had probably ‘found their way to St Petersburg.’ The damning report finished by asserting that Boxer had been ‘dumped down’ in Bandar Abbas ‘with as little ceremony as that attending to the landing of a bag of dates’.

Responding to the report in a letter to the Secretary to the Government of India, Boxer expressed ‘a great deal of annoyance’ about the allegations. While insisting that many of the statements made were ‘entirely untrue’, he did concede that the consulate’s landlord had not been paid rent for a year, leading to the abandonment of building work, and that his interpreter was to take four months’ sick leave, ‘caused entirely by this wretched house in which he has to live’.

Boxer, a married man with children, ended his letter – written less than three weeks before his death – in a tone that smacked of desperation. ‘My position here is most trying’ he began. ‘It would be most kind of you if you would give me some idea of how long I am to be here, and whether I have any prospects of this leading to anything.’ In a follow-up article published on 1 August 1902, The Times of India commented that, in the wake of Boxer’s death, it hoped ‘Government will now recognise more fully […] the peculiarly trying character of life at Bandar Abbas [and] do something to ameliorate the conditions under which the Vice Consul has to perform his duties’.

Extract from the Administration report for the district of Bandar Abbas (1908), written by Captain William Henry Irvine Shakespear. From Administration Reports 1905-1910 (IOR/R/15/1/710)

In 1908 work was completed on a new complex of consular buildings at Bandar Abbas. Costing some 65,000 rupees, the two-storey building and adjoining compound comprised offices, accommodation, telegraph office and hospital, all enclosed within six-foot high defensive walls. ‘The new buildings have produced an excellent effect on the public mind’ announced the new consul, Captain William Henry Irvine Shakespear, ‘the political predominance of the British flag at this port being well typified by their superiority and extent’.