In 1905 a proposal was put forward to appoint a consular assistant to the Consul-General at Bagdad, with the Government of India recommending John Calcott Gaskin for the position. Gaskin had most recently served in the newly created position of Assistant Political Agent at Bahrain and had impressed both the Political Resident in the Persian Gulf and the Foreign Department of the Government of India with his diligence in the role. However Gaskin could not be appointed Consular Assistant as he was not a member of the Diplomatic Service.  After much toing and froing he was named Assistant to the Resident, later amended to Commercial Assistant.

When war broke out in 1914, Gaskin was instructed by the Consul-General (on leave in Europe) to sink all of the Residency’s ammunition in the nearest river to prevent it falling into enemy hands. This action prompted his arrest by Turkish officials  and on 22 November 1914 he was sentenced to three months in jail. On 12 December 1914, however, he was released from prison and instructed to retrieve his belongs and depart Bagdad for Constantinople with other consular officials to be repatriated.

On arriving in Aleppo in March 1915, en route to Constantinople, Mr Gaskin was detained by police for having failed to serve the full three months of his sentence and was again imprisoned. The other consular officials on leaving Aleppo placed his case in the hands of the US Consulate, which promised to try to assist him. 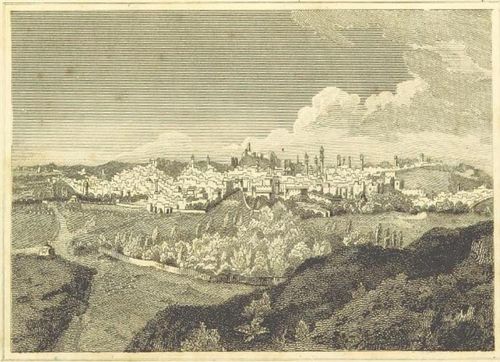 'Prospect of Aleppo' from Henry Maundrell, A Journey from Aleppo to Jerusalem at Easter. A.D. 1697 (London, 1810) BL flickr

On finally being released from prison Gaskin found himself trapped in Aleppo without the means to obtain food, clothing, or residence, as foreigners were no longer permitted to leave the city.  He  approached the US Consulate for assistance. The US Consulate asked the Foreign Office and India Office if Mr Gaskin could be paid his salary through them in order to survive in Aleppo.

This presented an unprecedented situation for both the Foreign Office and India Office. The Foreign Office’s rules stated that consular officials removed from their positions owing to war would receive full pay for six months, provided suitable work was found for them by His Majesty’s Government.  As Mr Gaskin had been interned, and therefore was not in a position to be provided with suitable employment, it seemed unfair to deprive him of a means of livelihood.  Military officers who had been interned received full pay for 61 days and leave pay thereafter.

The case was ultimately brought before the Secretary of State for Foreign Affairs, Sir Edward Grey, who concluded that as Mr Gaskin was unable to leave Aleppo, and as this situation was likely to continue for the foreseeable future, he should continue to receive full pay until he was released from internment and then suitable employment should be found for him.

John Calcott Gaskin was eventually released from internment following the end of the war in 1918, and reached England in November 1918 where he was placed on furlough to allow him time to recover from his ordeal, before being sent to his new posting in Mesopotamia.

Posted by Margaret.Makepeace at 09:00:00 in Journeys , Middle East , Politics , Qatar , World War One