A break-in at East India House

Just before 5pm on the afternoon of 28 October 1711 Benjamin Masters encountered an unfamiliar person, Thomas Abraham, on the Treasury stairs asking to be permitted to leave East India House. Abraham claimed he had been visiting East India House at the bidding of the house-keeper Mr Mickelthwaite so Masters left Abraham on the stair case and went off in search of the house-keeper to verify his story.

Unable to find Mr Mickelthwaite, Masters found Thomas Woolley, the Secretary to the Court of Directors, and informed him that there was a gentleman wishing to leave the building. On returning the Treasury stairs however Abraham was nowhere to be found.  A thorough search of the building led to the discovery of Abraham hiding under the scaffolding in the Sale Room, where he was found to be carrying two bags containing money and papers. A search of the Treasury revealed that around 1,100 guineas and notes along with bonds and other documents to the value of between £7,000-£8,000 had been taken by Abraham. 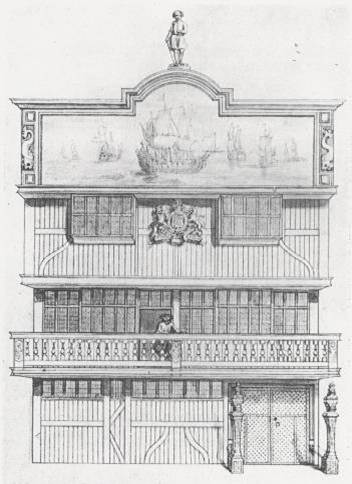 Thomas Abraham was tried at the Old Bailey on 5 December 1711, and despite claims of being under an ‘indisposition of mind’ and calling his doctor and apothecary to attest to his condition he was sentenced to death for ‘breaking open the House of the United Company of Merchants trading to East India … and feloniously taking away 1100 Guineas’.

On 7 December 1711 Abraham wrote to the Court of Directors of the East India Company from Newgate Prison begging them to intercede on his behalf and spare him the sentence of death for the sake of his wife and children. His pleas were successful as the Company obtained a Royal Reprieve from Queen Anne, proposing instead that Abraham be transported to the East Indies and serve the remainder of his days as a soldier in the service of the East India Company.

On 9 January 1712 Abraham again wrote to the Court of Directors, this time thanking them for interceding on his behalf and obtaining the sentence of transportation instead. The case received national coverage in the newspapers, with the Newcastle Courant reporting in June 1712 that Abraham had been taken from Newgate Prison and delivered to Captain John Lesley of the Abingdon to be shipped to Bencoolen [Bengkulu, Indonesia] to see out his sentence as a soldier there.

Posted by Margaret.Makepeace at 09:00:00 in Crime , Journeys