In December 1857, the British in India were still trying to suppress the military and civil rebellion which had broken out earlier that year in the north of the sub-continent.  The edition of The Bengal Hurkaru published on Christmas Eve 1857 gives an interesting insight into life in Calcutta at that time. 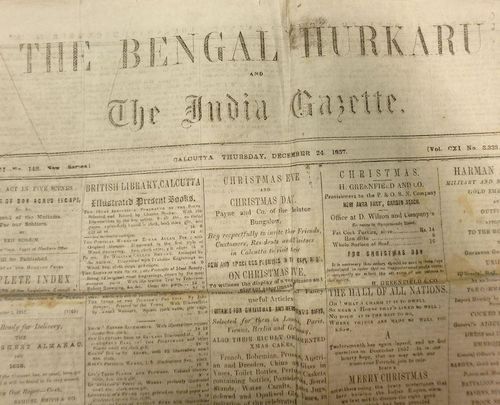 A first glance at the front page suggests that there was nothing worrying the British in Bengal.   There are adverts for shipping firms offering voyages to London and Australia; a notice for the annual general meeting of the Asiatic Society of Bengal; an announcement that a consignment of Stilton cheese had just arrived.  Bengal almanacs and souvenir diaries for 1858 were on sale, and the British Library Calcutta could provide ‘Illustrated Present Books’ including the works of Edgar Allan Poe. Purveyors D. Wilson and Co at ‘The Hall of All Nations’ had plentiful stocks of Christmas fare: turkey; ham; beef; and a wide variety of cakes, sweets and biscuits.

However Wilson’s advert had this statement tucked amongst the lists of treats on offer:
‘It is our hearty hope, that we may with our numerous Friends, join to celebrate a MERRY CHRISTMAS notwithstanding the heavy misfortunes that have befallen the Indian Empire since we last met to discuss the right good cheer which had been provided for all India AND its Inhabitants, in that Monster Establishment, “THE HALL OF ALL NATIONS”. Having however good reason to suppose that the British rule in India, is about being established in a firmer manner than ever it was before, we expect, not unreasonably, that our Friends will need the choicest and rarest Articles procurable, to enable them to usher in with great glee, A HAPPY NEW YEAR’.

The inner pages of the newspaper do carry detailed reports of military operations, including the relief of Lucknow, with lists of casualties and returns of guns and ammunition seized from rebels.  Several military promotions are announced to fill the places of those killed recently.  But these items are sandwiched between news of everyday life in Calcutta – the early closure of grog shops;  the routine comings and goings of East India Company personnel; commercial and shipping intelligence; and performances by Signora Ventura,  the Calcutta Town Band, and minstrels from New Orleans , as well as by ‘an actor of acknowledged Gymnastic abilities from France’.

Read about Christmas in Calcutta in 1938

Posted by Margaret.Makepeace at 09:00:00 in Conflict , Domestic life , South Asia