The Molino atlas is a collection of manuscript maps and drawings depicting, on the whole, geographical locations important to the Venetian Empire. It is named for the Molino family of Venice, to whom a number of the maps are dedicated, and the majority of the maps were created around 1630.

The atlas is significant not only for its George III provenance, but also for once having belonged to Sir Hans Sloane (1660-1753) and it is listed in the Sloane printed books catalogue.  Sloane presented the atlas to Queen Caroline, consort of George II.

Previous catalogue descriptions have disputed the number of maps contained within. The British Museum’s  1829 catalogue  of the collection suggests the atlas contains 95 maps, but the 1844 catalogue of manuscript maps, charts and plans suggests 94 maps. The current count confirms there are actually 117 separate items in the atlas, to include maps and also some drawings.

Of particular interest are a number of maps of imagined and idealised military locations. It would not have been unusual for a young, earnest and ambitious military engineer to undertake such maps at this time. 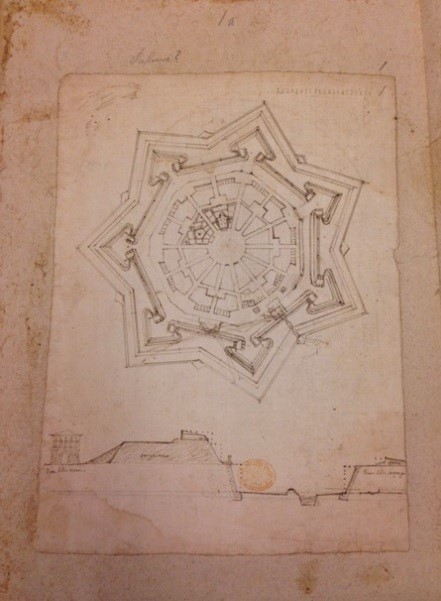 The map above was identified as "A plan and section of the fortifications of Palma" in the 1844 catalogue. However, the shape of the fort does not seem to correspond to Palma, Majorca (there is no indication of any coastline), nor does it correspond in number of bastions to that magnificent Venetian-built star fort of 1593 at Palmanova, Italy. 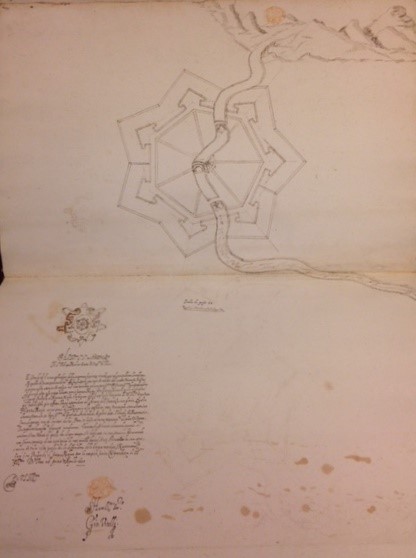 This map is unusual within the atlas for being signed; by Giovanni Battista Vitelli. The lengthy text at lower left, surmounted by the Molino coat of arms, comprises a dedication to Filippo Molino. 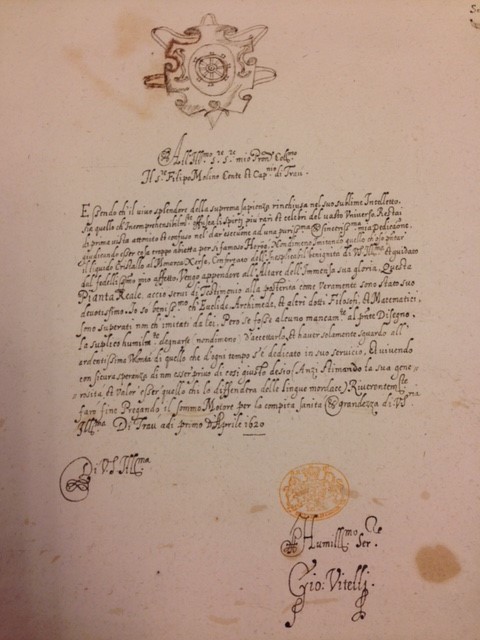 Again, the 1844 catalogue is quick to assign the map as being, "A plan of the fortress of Trau" However, the fort bears no resemblance to any defences in Trau (now Trogir, Croatia). Careful reading of the text confirms it was produced in Trau, and seems to be another example of an imagined fort (with a waterway running through it!). 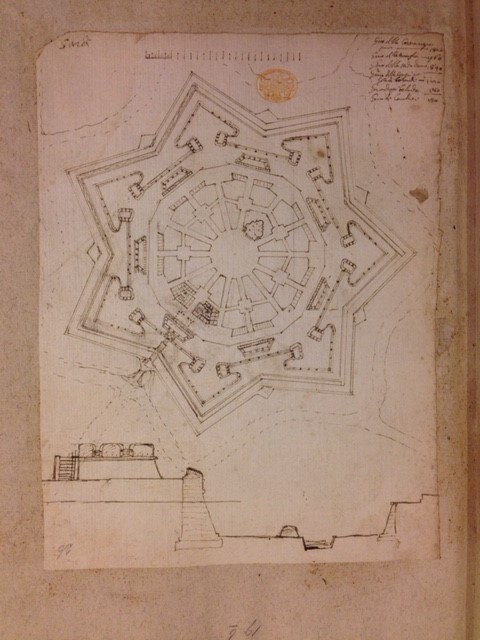 Finally, this map has previously been catalogued as “Casal” (Casale Monferrato?), but shows seven bastions, whereas the citadel actually had six. Whether this is a plan for an imagined fort, or whether it exists (or existed) and has not yet been identified correctly, or whether it is a proposal for a fort, it is an interesting inclusion in the atlas.

These are not the only maps of imaginary locations within the K.Top, there is evidence to suggest even George III produced his own map  of an invented palace, but the Molino atlas is a wonderful repository for many of these idealised maps.

Posted by Margaret.Makepeace at 09:00:00 in Manuscripts , Maps