Preparation Pays Off: Bertram Thomas and the Crossing of the Empty Quarter

Today is the 85th anniversary of the start of the historic crossing by Bertram Thomas of the Rub’ al-Khali, the vast desert known in English as the Empty Quarter which occupies the south-east corner of Arabia.  On 10 December 1930 Thomas set off from Dhofar, Oman, arriving 59 days later in Doha, Qatar - the first European to traverse this extreme, inhospitable environment.  This landmark achievement in desert exploration is being marked by an expedition of three Omanis and a Briton to retrace the steps of the Omanis and Thomas.

Following the defence of Muscat during World War One from the besieging tribesmen from the Interior under the Imam of Oman, the Government of India sought to restructure Muscat State to reduce its dependence on loans and borrowing from Indian merchants.  Part of this reform was the appointment of a British financial adviser to the Sultan of Muscat and Oman.

Bertram Thomas went out to Muscat as Financial Adviser or Wazir to Sultan Taimur bin Faisal Al Bu Sa’id.  After service in Mesopotamia, Thomas jumped at the opportunity of a posting to Muscat.   In December 1924 Thomas wrote from London to Colonel Francis Prideaux, the Political Resident in the Persian Gulf, that he was ‘tremendously looking forward to the possibilities of Mascat. Some kind friend has compiled a bibliographical list of every work and paper previously published on Mascat or Oman and I’ve made some slight progress towards collecting a library of some of these publications’. 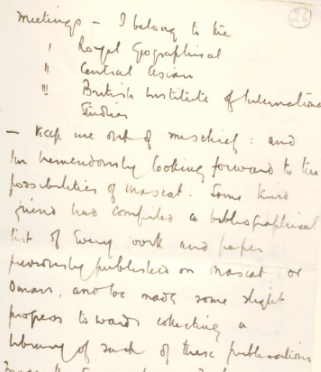 Thomas combined his official duties of bringing a semblance of order to the budget of the Muscat State with his passion for exploring the archaeology, geography and natural history of Muscat and Oman. He honed his skills with some trips to the area round the Musandam Peninsula where he sought to identify the allegiance of different tribes to assist in dispute resolution and tax collection. In 1926 Thomas went up to the northernmost tip of the Arabian Peninsula to investigate the affiliations of the tribes in order to resolve a conflict between the Shaikh of Kalba and the Shaikh of Fujairah.  The Political Agent in Muscat informed the Political Resident in Bushire: ‘Thomas is making enquiries carefully and extensively to procure information, but this will take time. Areas referred to are not clear to us'. 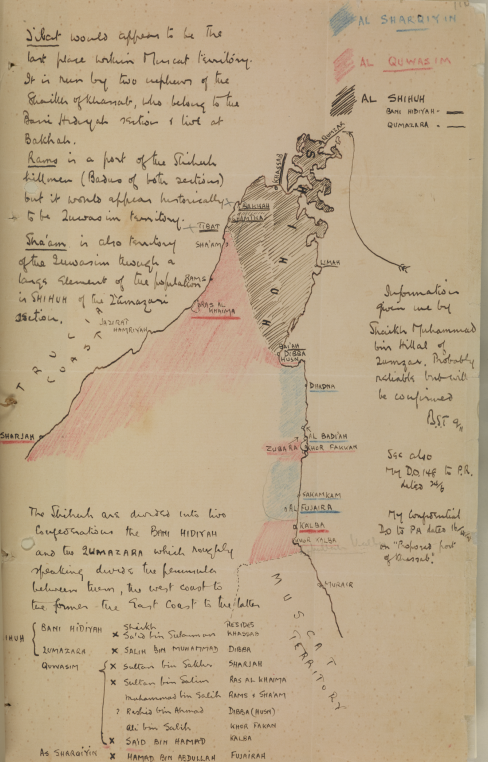 His hand drawn map is shaded with different colours to demarcate the tribal areas of the Al Sharqiyin, Al Qawasim and Al Shihuh.  The Al Shihuh territory of the Musandam Peninsula was deemed to be a feudatory of the Sultan of Muscat.

Thomas stayed at his post in Muscat in the burning hot summer months so he could take leave in the cooler winter months and undertake preparatory expeditions to Dhofar.  He learned that it was essential to have camels used to the sands and he built up the trust of and confidence of the tribes who would help him make the crossing.  In early December 1930 Thomas hitched a ride from Muscat to Dhofar with an oil tanker of the Anglo-Persian Oil Company.   He almost had to abandon the expedition because of a tribal feud but his guides turned up at the last moment.  Thomas’s preparation had paid off and his attempt to cross the Empty Quarter could begin…

Posted by Margaret.Makepeace at 10:45 AM