We now have much new knowledge on the men and women who from their shops and workshops in London's  Sailortown supported the thousands of vessels and ships from all over the world that in the eighteenth century made their way to the Pool of London. 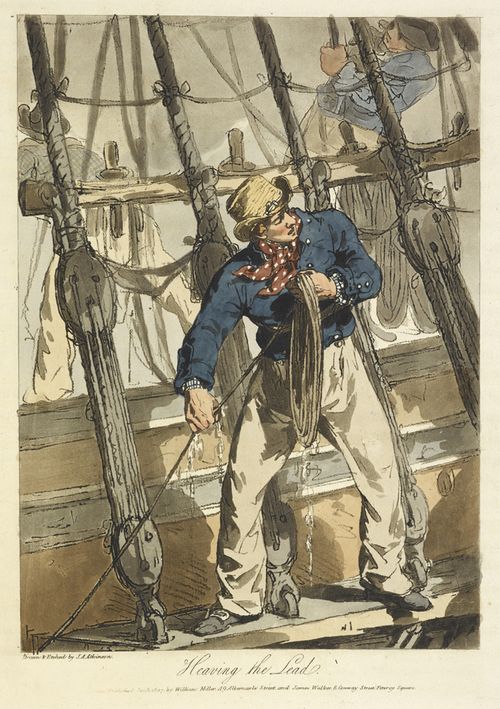 ‘Heaving the lead’ from John Augustus Atkinson, A picturesque representation of the naval, military, and miscellaneous costumes of Great Britain (London, 1807) Shelfmark 146.i.4 Images Online

To make a financial ‘gain’ as distinct from a ‘loss’, the owners of a collier ship from Newcastle had to make eight or nine voyages in a year. Thus they were very dependent on the quality and speed of their suppliers on the north bank of the Thames. They needed the services of anchor smiths, mast makers, ship chandlers, blacksmiths, and sailmakers together with suppliers of short beer, cabbage, flour and potatoes.

Recent studies have placed an emphasis on unravelling the merchant networks based in Wapping and Shadwell that spanned the world. Two networks are of significance.

The Camden, Calvert and King partnership of Wapping between 1760 and 1824 was at the heart of a complex and significant network which had global reach. Important in their success was the patronage of Sir William Curtis, a well-known Wapping government contractor and Lord Mayor of London in 1795-96. The group's activities included the development of the Pacific whale fishery, convict transportation, and the settlement of Australia, in addition to fulfilling their ‘core’ business of providing ships for government provisioning contracts or transportation hire.

The second important network was based in Shadwell, and traded with Russia. William Hubbard, a linen draper and son of a dissenting minister in Mile End Old Town, went to Russia in about 1770. He established one of the leading British trading groups in St Petersburg that persisted for nearly 150 years. In Victorian times John Gellibrand Hubbard (1805-1889) was created first baron Addington. The family’s connections were with Wiltshire and New Stairs, Shadwell, as biscuit bakers, ropemakers and Russia merchants. Together, they are an excellent example of a merchant group firmly based on trusted family links in which they all prospered greatly.

Thanks to recent important studies of ports and their associated cultures we are beginning to piece together a better understanding of their inter-linked cosmopolitan populations and the expertise that these residents of 'Sailortowns' bought to maritime communities. Many of the 'merchants' who supplied the Navy in major Ports such as London and Portsmouth were also providing services on a regional basis through a system of 'Agents' based in places such as Falmouth, Plymouth and elsewhere. This system of agency worked well for both navies with the provisioning of Royal Naval Ships and services such as regional representation for merchants and the ships of the Merchant Navy.

This was particularly important for the East India Company who appointed regional agents based in 'Key Ports' where they dealt with crewing and last minute provisioning, as well as providing important services and help for many merchants with the sales of 'Prize' ships and their cargoes. The networks of men such as Charles Lindegren, East India Company Agent for Portsmouth, and Joseph Banfield of Falmouth allowed many London merchants and government provisioning contractors to offer a smooth and efficient all round service and was one of the major reasons for Britain's maritime supremacy.

Posted by Margaret.Makepeace at 09:00:00 in Business , Commerce , Journeys , Work