John Michael Houghton was an important member of the East India Company’s expedition that surveyed the Persian Gulf during the 1820s. A talented draughtsman by trade (his fourth son was the painter Arthur Boyd Houghton), he drew many of the charts and maps produced by the survey, now held in the British Library’s India Office Records map collection. Houghton’s drawings of towns such as Dubai, Sharjah and Al Bida (Doha) are amongst the earliest-known visual descriptions of these places.

Houghton also wrote a ‘memoir’ which describes all that he saw on the survey between Musandam and Dubai. This memoir has been digitised and is now published on the Qatar Digital Library.

Houghton was born in London in 1797, the son of a naval surgeon employed by the East India Company.  He received a classical education before sailing for China on board the Elphinstone on 25 March 1812. In Canton he transferred to the Bombay Marine’s survey ship Discovery, which spent five years surveying the China Seas. By 1821, Houghton had risen to the rank of Second Lieutenant, and was working as marine draughtsman on the East India Company’s survey of the shores of the Persian Gulf.

Houghton’s signature, in the introduction to his ‘Memoir’ of the Arab coast of the Gulf. IOR/X/10309, f 4

Lieutenant John Guy, commanding officer of the Discovery, engaged Houghton to produce an account of the voyage along the Arab coast of the Gulf.  In vivid detail he described the coastal landscapes he saw, and the human settlements and local rulers he encountered, writing from the perspective of an outsider encountering a foreign land. Houghton described the houses of Sharjah as ‘mean’ and the town of Dubai as ‘a miserable assemblage of mud hovels, surrounded by a cow mud wall’. 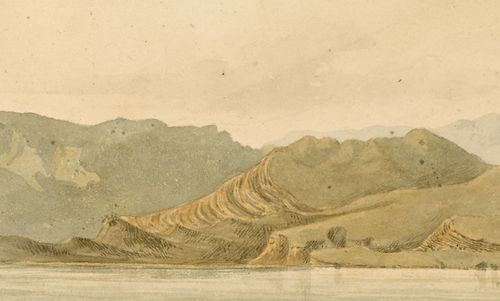 Of greatest interest to Houghton were the geological formations he saw from the deck of the Discovery.  Studying the cliffs and shallow inlets encountered along the Arabian coast of the Persian Gulf, Houghton compared and contrasted what he saw with what he had read in the latest geological studies from Europe, including the works of  John Playfair, Erhard Georg Friedrich Wrede, Leopold von Buch, and John MacCulloch. 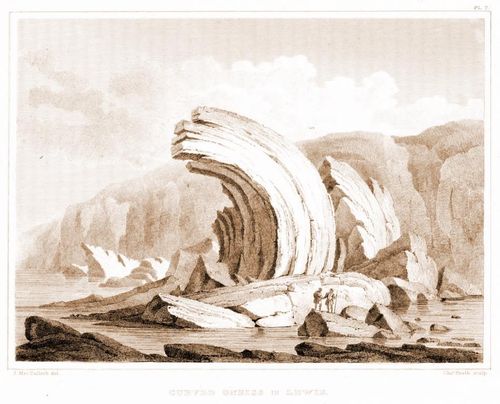 Plate from John MacCulloch, A Description of the Western Islands of Scotland, including the Isle of Man (1819) via archive.org

Comparing the southern climes of the Persian Gulf with the seas around northern Europe, Houghton began to formulate conclusions of his own. His observations led him to refute Wrede’s ideas that ‘the sea is retreating to the southern hemisphere’, and the Italian natural philosopher Paolo Frisi’s assertion that the sea appeared to be ‘sinking near the poles, and rising towards the Equator’.

Houghton continued his rise through the ranks of the Bombay Marine after the completion of the Persian Gulf survey. By 1833, he had risen to the rank of Commander, and was Auditor of the Indian Navy. Ill health forced him to retire in 1838, though it was not until 1874 that he died at his home in Hampstead, London.

Posted by Margaret.Makepeace at 09:00:00 in Journeys , Maps , Qatar , Science and environment