Passenger aviation across the Gulf during the 1930s - Bahrain

Having explored the passenger facilities at Sharjah aerodrome in an earlier post, we will now move to the next aerodrome on the Imperial Airways route - Bahrain.  Compared to Sharjah, the aerodromes in Bahrain offered relatively little in terms of conveniences for passengers. There were two terminals, one for flying boats and the other for conventional aircraft. The more developed terminal for landplanes was on Muharraq Island and the smaller flying boat terminal was at Manama.  The landing strip on Muharraq was delineated by a circular marking composed of ‘Portland Cement Concrete in the proportions of 1 part of cement to six parts of broken stone’ and this was topped with bitumen paint.

Bahrain’s position relative to Sharjah meant that it was either the penultimate stop or the lunchtime stop on the eastbound or westbound routes respectively. The aerodrome was described by through passengers as being a small part of a ‘sandy waste’. The only terminal building was a ‘barusti’ or thatched palm shack, with walls composed of 88065 cubic feet coral stone masonry built in mud.  There was a signpost outside, ‘one arm pointing to London and the other to Karachi’. Whilst wrapped up in their aviation adventure, through passengers would have consumed lunch for the 45 minutes it took to refuel the plane, the gentle desert wind wafting through gaps in the roof above their heads. 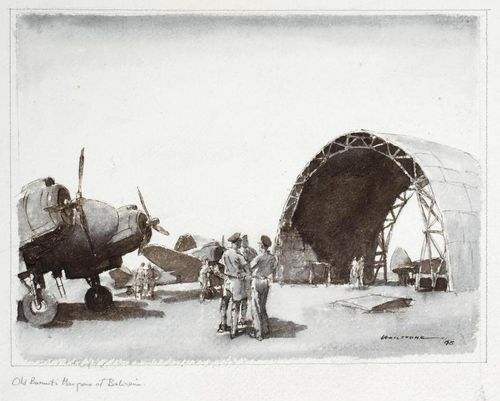 Five years after the first commercial flights from the landing strip at Muharraq, Imperial Airways’ Short brothers Canopus class flying boats started landing at Manama, just off the north-eastern edge of the city. The flying boat aerodrome at Manama offered a similarly rudimentary passenger experience to Muharraq: the map below shows the ‘suggested site for passenger shelter’ which sat on a small pontoon jutting out into the bay.

The lack of facilities for passengers at Muharraq is highlighted by correspondence concerning preparations for the fly through in 1934 of Lord Willingdon, Viceroy of India.  A letter from the Political Agency of Bahrain stated:  ‘I hope that His Excellency the Viceroy will permit those present at Bahrain aerodrome to wear hot weather lounge suits in view of weather’. So perhaps facilities for shade could have been improved!  In a letter from the Viceroy of India’s staff it is noted that Lord and Lady Willingdon ‘will be very pleased to accept the invitation of the Shaikh of Bahrain to take coffee with him in the tent which he proposes to pitch’ which does not sound exactly prepossessing for a Viceroy or other VIPs who would have been accustomed to 1930s elegance.

Rolling forward into 2015, and unlike Sharjah, all traces of the former aerodrome have been obliterated as shown in the two maps above, the first dating from 1934.

Posted by Margaret.Makepeace at 09:00:00 in Journeys , Middle East , Qatar