Today is Plough Monday, the first Monday after Twelfth Day.  Traditionally this was the day when agricultural workers resumed their duties in the fields after the Christmas break.  In some parts of Britain the day was marked by a procession through the village.  A plough attached to long ropes was drawn by 30 or 40 men in clean white shirts with brightly coloured ribbons tied to their arms, shoulders, and hats.  The men were usually accompanied by an old woman, or a young boy dressed as one, known as the 'Bessy'.  Musicians and sometimes Morris Men  joined the celebrations, with a fool collecting money from spectators to spend on a convivial night in the local alehouse. 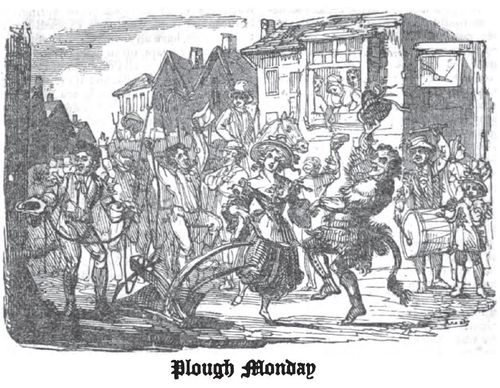 If a ploughman returning from work on Plough Monday came with his whip to the farm's kitchen hatch and shouted 'Cock in pot' before the maid could cry 'Cock on the dunghill', he won a cock to eat on Shrove Tuesday.

Celebrations could spill into towns.  On 17 January 1846, the Cambridge Chronicle and Journal reported: 'The annual invasion of Cambridge by the hard-handed sons of toil from the neighbouring villages took place last Monday, and our streets echoed from morn till night the strains of some vile fiddle, the jingling of bells, and the oft-repeated cry of "please remember the poor plough-boy"'.

In 1849, 115 unemployed filesmiths wearing costumes and accompanied by a band borrowed a plough and paraded through Sheffield.  They hoped to raise a few shillings to supplement the financial support being given to them by the file trade: 'We are the men who have not been burdensome to the parish, and have saved the ratepayers more than £10,000. God speed the plough. Remember the poor filesmiths'.  After paying for refreshments, each man took home about 1s 8½d, 'a small pittance, after so hard a day's exertion'.