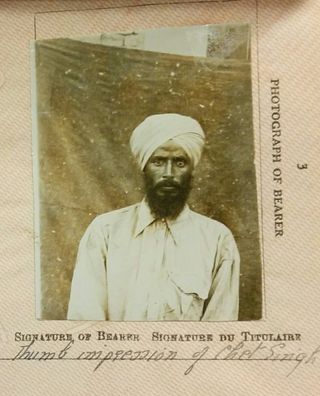 What connects war heroes, a barber and campaigners for Indian independence? These people all appear in the India Office Records which are a rich source of biographical information about people from Asia and the Middle East c 1600 – 1947. South Asian heroes of the world wars are documented in the military records. The barber, together with many students, medical practitioners, merchants, agriculturalists, ayahs and people from a wide range of professions can be found among the duplicate passports 1932 – 1948. Campaigners for independence appear in many places in the archives, including the Politico-Criminal “Who’s Who” of the Bengal Presidency (1930).

These are just some of the rich sources I have discovered since joining the British Library in 1996, which contradict the then widely-believed myth that the India Office Records contain little about individuals from Asia and the Middle East. Perhaps the myth was based on the lack of obvious series of well-organised military and civil service records such as there are for Europeans. Maybe the myth reflected the more diligent searching required to track down people from Asia and the Middle East, and the difficulty of predicting what you might find. Keen to dispel the myth and connect researchers to the material they need, the India Office Records team is using the Explore Archives and Manuscripts catalogue and the online India Office Family History Search to highlight sources for Asian biography.

Explore Archives and Manuscripts allows us to bring together material relating to a theme so we have set one up for “Asian Biography” to make it easier for people to identify the material scattered through the archive. We are in the early stages of linking the material we already know about and we are still learning about other sources so this is a work in progress; the beauty of this approach is that we can share information immediately rather than taking years to put together a definitive guide.  To find out what has already been linked to this theme, simply type “Asian Biography” into the search box in Explore Archives and Manuscripts, as shown in this screen shot below. We would love to hear from you if you know of important sources that we should link to this theme, so please e-mail us at ior@bl.uk 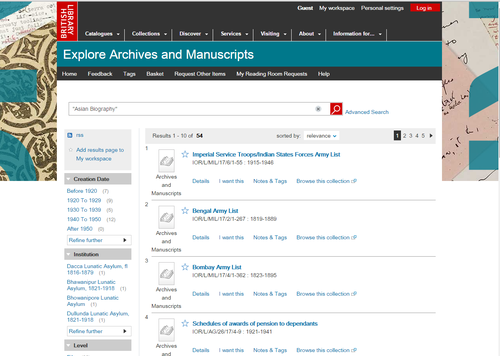 We are using the India Office Family History Search to showcase information about Indians’ military service contained in the Bengal General Orders (1830 – 1834). This small sample contains over 10,000 entries relating to Indian soldiers, including details of pensions for dependants of men killed in action, promotions, court martial cases, invalids and pensioners. We have already added 2,300 entries to the database, including all details of pensions for soldiers’ dependants (1830 – 1834) and some of the copious records of soldiers awarded pensions. We are slowly adding the rest of the data. It is a tiny proportion of the information available but adding it is an important step towards making the India Office Family History Search more representative of the contents of the archives.