On Monday 9 January 1854 the Marylebone Free Library opened its reading rooms for the first time.  Situated at 27 Gloucester Place, New Road, in north-west London, it offered free admission to anyone above the age of fourteen from 10 in the morning until 10 at night every day except Sunday.

The Library was stocked with more than 3,000 volumes, comprising ‘works of interest and utility to every class of reader’. It relied entirely on voluntary subscriptions and donations of cash and books.  Amongst those responding positively to an appeal for book donations ‘for the information of the Working Classes’ was the East India Company. Below is the front page of the letter sent to the Company by E A Somers of the Committee of the Marylebone Free Library. 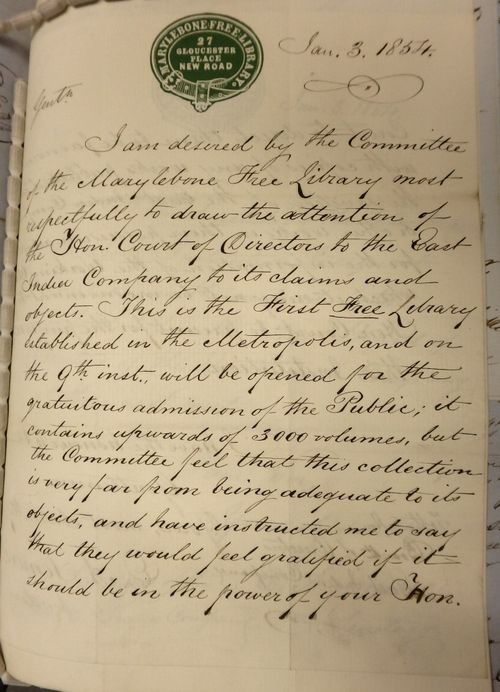 Appeal letter from E A Somers preserved in East India Company Finance and Home Committee Papers IOR/L/F/2/169 No.53 of 1854

Marylebone Free Library was an immediate success.   A week after the opening, Joseph Grote gave a progress report to the Marylebone Vestry.  In the first five days there had been 677 readers , 663 male and 14 female, identified as coming from the social group for which the Library was intended – the ‘respectable class of mechanics’.  Grote said that many came in wearing their paper caps and flannel jackets.  The readers' behaviour was impeccable: ‘as much quiet and order reigned every evening in the Marylebone Free Library as they would find in the library of the British Museum’.  A total of 687 books had been selected: 312 history; 289 literature, poetry, and drama; 40 science and arts; 19 philosophy; 17 theology; 12 law, politics, and commerce. Grote hoped that these figures would be publicised to encourage the help of benevolent individuals ‘desirous of improving the moral and social condition of their fellow-creatures’.

The rooms were well-lit and warm, furnished with baize-covered reading tables, and writing materials were provided.  Yet the public were keen to have the pleasure of reading at home so a lending library of 1,000 books was established and operated by working men.  In the first eighteen months, 5,732 volumes were taken out, none of which was lost or wilfully damaged.

The occupations of the people using the reading rooms were tabulated in 1855.  Male readers totalled 25,721 and of these the largest group was schoolboys and male pupil teachers (10,187) followed by carpenters, plumbers, painters, decorators, and the building trade (5,693). Other male users were identified as labourers, costermongers, clerks, shoemakers, tailors, smiths, artists, and missionaries. Amongst the female readers (444), the largest identified groups were governesses and pupil teachers (146) and schoolgirls (91). Dressmakers and servants were the other specified female occupations.

In spite of its popularity the Library lacked sufficient funds to survive.  Appeals for help in the summer and autumn of 1856 were ineffective and the local ratepayers refused to sanction a rate to support its activities.  The Library announced that it would be forced to close on 24 June 1857 and books would be returned to donors who applied before that date.

Posted by Margaret.Makepeace at 09:00:00 in Leisure