When Thomas Hickey sketched Prince Shukr Ullah on January 13 1801, this elegant ten year old boy’s life had just undergone a seismic shift. In 1799, when he was 8 years old, his father, Tipu Sultan of Mysore, had died in battle against the English East India Company. 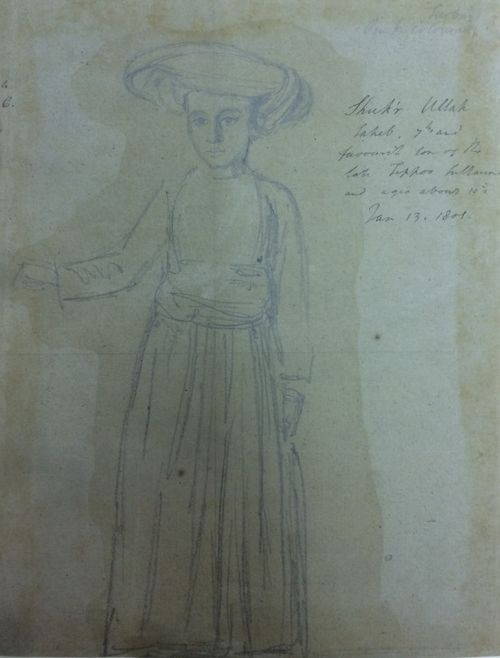 According to the inscription on the drawing of Shukr Ullah, he was the “7th and favourite son of the late Tippoo Sultaun”. It is entirely possible that Tipu wanted this “favourite son” to ascend the throne of Mysore, but instead, he lived the rest of his life under house arrest. It is difficult to understand why the British found Shukr Ullah so threatening; At his young age, he probably hadn’t lived beyond the palace confines of the zenana.

Thomas Hickey’s sketch of Shukr Ullah was made into an oil painting, which is now in the Victoria Memorial Hall, Calcutta. It was part of a set of 16 portraits by Hickey, which were sent to Calcutta in 1804 to be framed and displayed in the Governor General’s residence. All 16 portraits depict Indian men and boys whose fates were altered by the British after the Fourth Mysore War. Shukr Ullah’s six older brothers were painted as part of this set, but his six younger brothers were not. Today, the 16 Hickey portraits are in Calcutta’s Victoria Memorial Hall and in Rashtrapati Bhavan, New Delhi.

In July 1806, Shukr Ullah’s older brothers were implicated into a Sepoy mutiny at Vellore Fort. Soon afterward, their place of internment was moved from Vellore to Rasapagla, in Bengal. Shukr Ullah died there on 25 September, 1837 at the approximate age of 47.