Dhofar, Doha and a ‘Road Trip’ to Riyadh: Bertram Thomas’ sojourns in Arabia

These recent days have seen the 85th anniversary of the arrival in  February 1931 of the party including the legendary Omani, Shaikh Saleh bin Kalut al Rashidi al Kathiri, who guided Bertram Thomas across the Empty Quarter, to complete the first recorded crossing of the Rub’ al-Khali desert or the Empty Quarter: in 1930 ‘the broadest expanse of unexplored territory outside the Antarctic’.

They had started off from Salalah, Dhofar on December 10, enduring extreme hardship and constant threat of ambush by warring tribes to arrive in Doha, Qatar, 59 days later. Here they were warmly greeted by a welcoming party headed by the Emir of Qatar Sheikh Abdullah bin Jassim Al Thani.   Never would the sight of the ruler’s fort have been so welcome as it appeared to that band of weary travellers through the haze of desert air.  In celebration of the epic traversal of 1930/31, an Anglo-Omani expedition of three Omanis and one Briton have just retraced their steps, in audacious homage to the explorers of the earlier Anglo-Omani odyssey.

By completing this feat of desert exploration, Thomas and his party beat Harry St John Philby to the prize and glory of first crossing. St John Philby had based himself in Riyadh as he prepared to make his own journey.  It is reported that the news of Thomas’ successful crossing left Philby so deflated he refused to come out of his room for a week.  To rub salt in the wound Thomas also visited Riyadh some years later, an opportunity being afforded him by the post of Publicity Officer, Bahrain.  With reference to his preference for exploration over paperwork the Government of India informed the India Office, London, that:

‘We endorse recommendations that post of Publicity Officer be offered to Bertram Thomas in terms proposed by Prior and subject to Thomas being fit and willing to subordinate private to public interest.’ 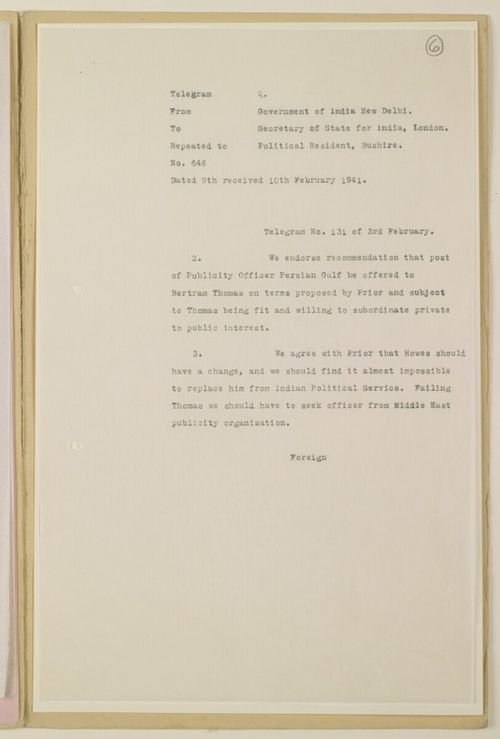 From Bahrain Thomas made another pioneering trip, this time by car along gravel tracks to Riyadh: ‘there was rain almost every day and we were bogged on occasions for hours at a time’.

He later reported to the Political Resident: “I had three very cordial conversations with Ibn Sa’ud who talked to me very freely and frankly about a great many subjects.  He gave me the whole story of the part he had played at the time of Rashid Ali’s rebellion, of the flying visit to him of Naji as Suwaidi which was most interesting. He also expressed his views on the Palestine question.  I got the impression that he thinks in qua-Moslem rather than qua-Arab conceptions of politics. He said that the greatest page in our history was written in the year during this war when we stood alone.  He is a convinced believer in our star and in our destiny to shape the post-war world.” 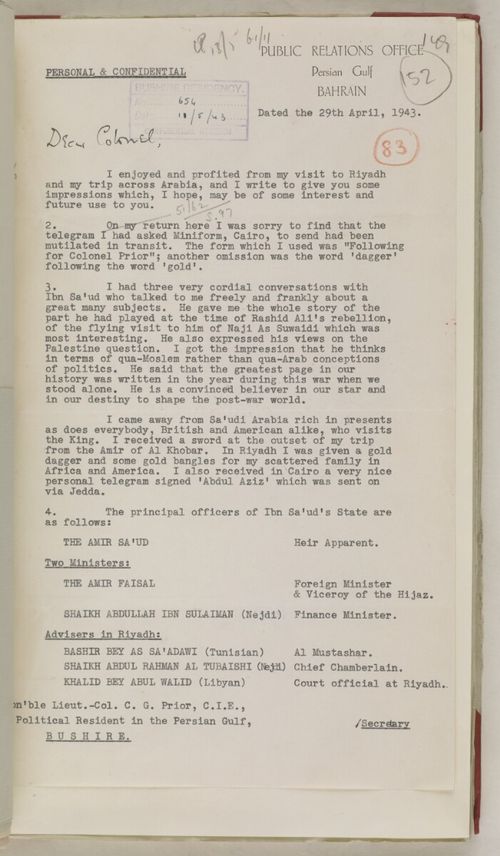 Thomas came away from his trip to Riyadh, ‘as does everybody, British and Americans alike’, with a great number of presents including a sword, a gold dagger and gold bangles; such things he continued to gather through other postings in Arabia which included representing the Anglo-Dutch oil company Shell in the shaikhdoms of  Trucial Oman. 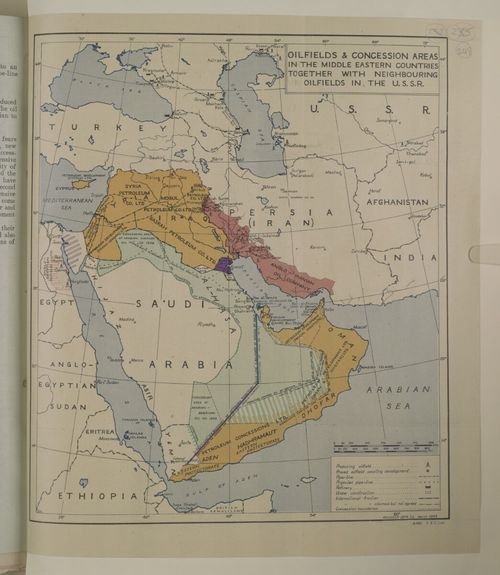 Thomas was not to see the change in Britain's post-war world, heralded most dramatically at Suez. He died in Cairo in 1950, and in a form of poetry in motion, at the end of all his gruelling and groundbreaking sojourns in Arabia, he was returned to the quintessential English village of Easton-in-Gordano, Somerset, to be buried near the house where he was born.