Today is Chinese New Year (the Year of the Monkey) and to celebrate we thought we would share with you some of the amazing images we have of China made by the artist William Alexander (1767-1816) who was appointed draughtsman on the first formal British diplomatic mission to China between 1792 and 1794. Born at Maidstone in Kent, Alexander attended Maidstone grammar school before moving to London in 1782 and enrolling as a student at the Royal Academy Schools two years later. It was whilst in London that the quality of his draughtsmanship was recognised, possibly by the artist Julius Caesar Ibbetson (1759-1817), and he was recommended to accompany Lord George Macartney's embassy to China as an illustrator. 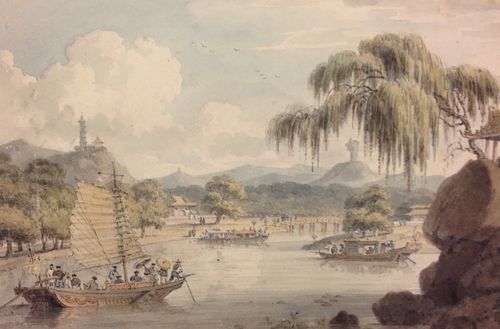 'View of Eastern Side of Imperial Park Gehol' by William Alexander in Thirty-seven water-colour drawings, made for the most part in 1792-3 on Lord Macartney's embassy to China, British Library Add MS 35300

Tasked with promoting British trading interests with China the Macartney Embassy landed at Tianjin in northern China in August 1793 and travelled overland via Beijing to Jehol near present day Chengde where the emperor Qianlong was residing beyond the Great Wall near Inner Mongolia to escape the summer heat. After much ceremony and discussion about how the embassy would be presented to the Emperor (particularly whether Macartney would kowtow to Qianlong) the mission failed to achieve any of its primary objectives and the embassy was dismissed by the Chinese on 3 October 1793. 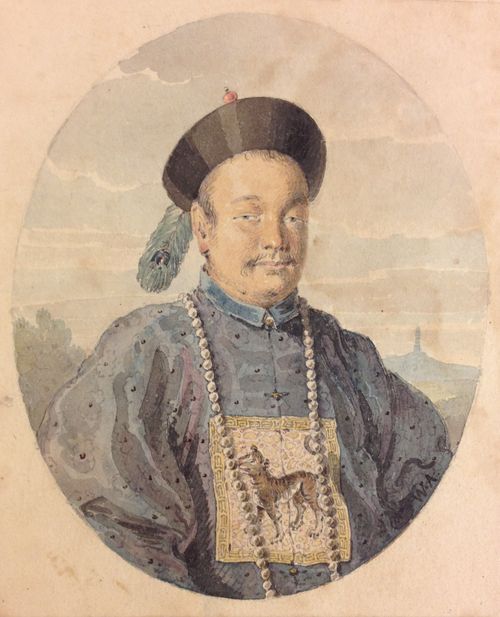 'Chinese Man' by William Alexander in Thirty-seven water-colour drawings, made for the most part in 1792-3 on Lord Macartney's embassy to China, British Library Add MS 35300

Yet despite this, the mission could be considered a partial success in that it exposed China to men like William Alexander who was able to make detailed observations of the great Chinese empire which he brought back and disseminated before an excited British public. During their long journey to meet the Emperor, the Macartney Embassy was treated with great hospitality by their Chinese hosts who allowed them guarded access to Chinese culture and customs. These encounters provided a rich source of inspiration for Alexander who made copious images of the Chinese landscapes and its people throughout his visit. 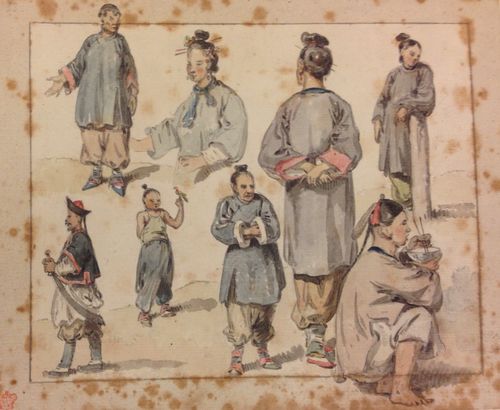 'Chinese Figures from Nature' by William Alexander in Thirty-seven water-colour drawings, made for the most part in 1792-3 on Lord Macartney's embassy to China, British Library Add MS 35300

Alexander’s experiences of China made a lasting impression on him and long after his return he continued drafting, publishing and exhibiting images of the country inspired by the mission. His drawings illustrative of the expedition were engraved for the official record in George Staunton’s An Authentic Account of an Embassy from the King of Great Britain to the Emperor of China (1797) and his own Views of the headlands, islands, etc., taken during a voyage …along the eastern coast of China (1798). All these images were immensely popular amongst the British public, coinciding as it did with the fashion for chinoiserie that so influenced the decorative arts in eighteenth-century Britain and which helped foster a strong commercial interest for the British in the Far East.

Though William Alexander is best remembered for his work on China he also has a close connection to us at The British Library. Some years after his tour of China, on 11 June 1808, Alexander was appointed assistant librarian and first keeper of prints and drawings at the British Museum. In 1810, he began the first inventory of the museum's collection of prints and drawings and so we owe him a great debt of gratitude that we are able to locate his, and many other, images in our collections today.

Like the Macartney Embassy, The British Library continues to seek to strengthen Sino-British relations and has recently announced that, for the first time in its history, it is to display some of Britain’s most iconic literary treasures in China. In all, ten items will star in pop-up exhibitions across the country between 2016 and 2019. They are expected to include handwritten manuscripts and early editions by some of the greatest British authors of all time, from Shakespeare and Dickens to the Brontë sisters and Sir Arthur Conan Doyle.