2016 is a Leap Year and so 29 February has been added to the calendar. Some may complain that they are working an extra day for nothing, but on the plus side anyone with a bill due on 1 March has another day to find the money.

Superstitions attached to Leap Year include the belief that beans grow in pods in the reverse position to usual, with the eye away from the stalk.  Leap Years are also regarded as poor years for lambing:
Leap Year
Was ne’er a good sheep year.

There is a tradition that it is the prerogative of women to propose marriage to men during a Leap Year. Guidance for this was given in a 1606 book entitled Courtship, Love, and Matrimonie:

‘Albeit it is nowe become a part of the common lawe in regard to social relations of life, that as often as every bissextile year dost return, the ladyes have the sole privilege, during the time it continueth, of making love unto the men, which they doe either by words or lookes, as to them it seemeth proper; and, moreover, no man will be entitled to the benefit of clergy who dothe refuse to accept the offers of a ladye, or who dothe in any wise treate her proposal withe slight or contumely’.

Should a man refuse the offer of marriage, he is supposed to make a gift of a scarlet petticoat or a silk dress to the disappointed woman. 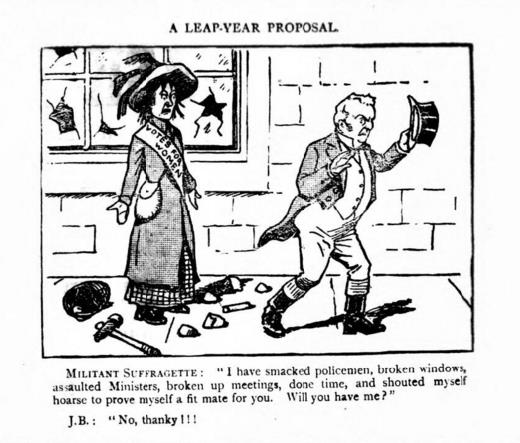 However in December 1931 Rev John A Mayo, rector of Whitechapel in London, declared that he was not expecting an increase in the number of weddings at his church in the following Leap Year.  After 40 years as a clergyman he found that Leap Year never affected the marriage rate whereas the state of trade did. If the economy picked up in 1932, more people would marry regardless of whether or not women were proposing.

Leap Year proposals are not limited to the young. Neighbours Thomas Towers, 83, and Eliza Ann Wilson, 80, were wed in October 1936 after she proposed to him when he asked her about providing lodgings: ‘I don’t want any lodgers, but I don’t mind marrying you’.

A widow in Birmingham seized the 1932 Leap Year opportunity to send a letter proposing marriage to an inmate of the Poor Law Institution in Barnstaple Devon. She had read newspaper reports of how the man was expecting a cheque for £1,000 in back wages from a former employer in America.  The managers informed her that he already had a wife.

I’ll give the last word to a wife at Shoreditch County Court in 1924 who made a different kind of Leap Year proposal. She declared: ‘A woman does not need Leap Years to get a husband. What she wants is an easier method of getting rid of them’.

Posted by Margaret.Makepeace at 09:00:00 in Domestic life , Women's histories