To celebrate the birth of Samuel Pepys on this day in 1633, this blog looks at another more controversial birth - that of James Francis Edward Stuart, the Old Pretender, on 10 June 1688. The reason for this seemingly arbitrary pairing is a manuscript, owned by the British Library, which connects Pepys, the Old Pretender and the 'Warming-Pan Scandal' of 1688.

When James Francis Edward Stuart was born, doubt was cast as to whether he was the legitimate son of James II and Mary of Modena, not least because he was strikingly healthy compared to their other children, all of whom had died in infancy. Mary of Modena was a devout Catholic and there was a fear that a Catholic heir to the throne would threaten Protestant England. This led to James II's enemies creating an elaborate story that the heir was not legitimate.

A rumour began that an imposter baby was smuggled into the palace via a warming-pan and brought to Mary who was feigning childbirth. The History of Parliament have written a brilliant blog on the subject here. One of Mary of Modena's ladies-in-waiting, Margaret Dawson, produced a testimony, which detailed the birth of the Old Pretender. The British Library owns this testimony in which Dawson states "I found it a duty incumbent upon me to bare true witness to the birth of the Prince of Wales giving and Eye witness of it". Dawson also mentions the warming-pan, making clear that no baby was hidden inside: "I did also see fire in the faimose warming pan for much talked on". 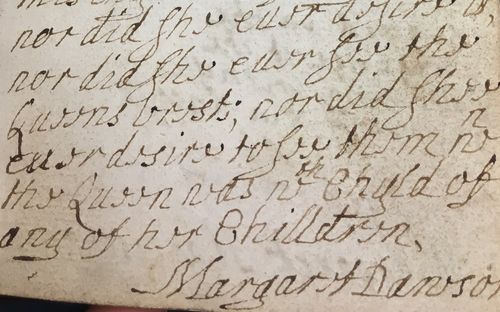 Samuel Pepys borrowed Dawson's manuscript between 22-29 August 1695 and took notes in cipher from it. These notes can be found  among the numerous manuscripts written by Pepys which are held at the British Library.  Pepys visited Margaret Dawson on 22 August 1695 as she was the last surviving witness at the birth: "Notes taken from Mistress Dawson touching the birth of the Pr. of W., at a visit by me this day was made expressly to her to purpose, in order to my obtaining a full and impersonal judgement of the matter, while she the best living evidence may be resorted to in it."

Pepys does not explain why he wished to obtain a full and impersonal judgement but it is clear that he spent some time investigating the birth, visiting Dawson and preparing follow-up questions.

The British Library also owns other material relating to the birth of the Old Pretender which can be found at Add MS 32096.

There's also an excellent exhibition on Pepys at the National Maritime Museum, to which the British Library have loaned a number of items.

Rachel J Weil, 'The politics of legitimacy and the warming-pan scandal' in Louis G . Schwoerer The Revolution of 1688-89: Changing Perspectives, (Cambridge, 1992)

Posted by Alexandra Ault at 10:55:36 in Manuscripts , Politics